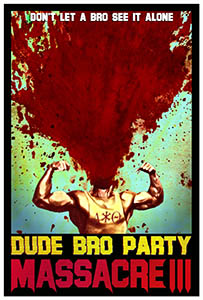 Not many films can claim they started as a 5-second parody trailer, but this marks the humble beginnings of Dude Bro Party Massacre III, spawned from the aptly named 5-Second Films, who made smirksome little vignettes once a day, every day.

Crowdfunded for a feature length production, the slasher opus gets lampooned once again – but what new can be done with it that wasn’t done in everything from Student Bodies and Wacko to Scary Movie and The Final Girls?

Story first. Fratboy Brock Chirino has survived two fraternity row massacres, courtesy of vengeful killer Motherface, who has it in for the Dude Bro’s, brothers of the Delta Bi Theta Frat House. After he recaps the events of Dude Bro Party Massacres I & II – as per Adrienne King’s extremely eidetic flashback dreams – his throat is viciously cut by his therapist. 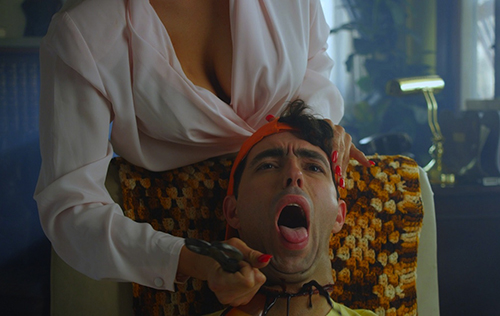 Soon after, Brock’s twin brother Brent arrives to find out the truth of his bro’s “fatal freak accident” and seek revenge. He’s quickly inducted into the fraternity and they are expelled from campus for Spring Break after a prank ends up killing 250 people.

The Dude Bro’s journey out to a closed down sorority house by a lake where Motherface springs up and kills them in a variety of weird and grisly ways, from turning one bro’s head into a blood kegger to electrocutions, impalings, and flushing a guy’s intestines down a toilet. Soon, only Brent is left to find his answers and try to defeat Motherface and close the book on the Dude Bro Party Massacres for good.

Without a doubt, the smartest decision made was to style the film as a forgotten 80s late night horror film taped from a cable channel, complete the VHS slurs, hastily edited out TV commercials for all manner of strange products and services, and the general naff appeal of the mid-80s teen horror film, though at times the production quality was a bit too good. 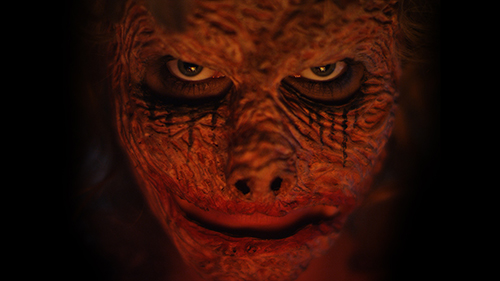 The film authentically looks the part (usual hair and eyebrow exceptions notwithstanding), and is perhaps only weighed down by running about ten minutes too long and the jokes either hitting the target or not. The slasher sentiments were all on point for me, but I was confused by the bizarre (and annoying) cop subplot, which prompted a few random chuckles, but never converged with the other events going on. Though thankfully it doesn’t go down the same ego-strumming route that ended up shooting Club Dread in the foot.

Definitely an acquired taste, but fans of splatstick OTT gore and the associated black humour won’t be disappointed (though a good whack of the bodycount comes hard n’ fast at the start). Look out for Larry King as the coach during the flashbacks.