EDGE OF THE AXE 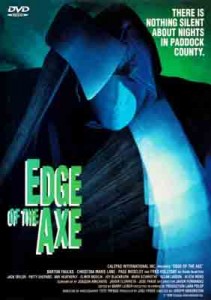 “There is nothing silent about nights in Paddock County.”

A Spanglomerican slasher filled with heavily-accented actors pretending to be small town Americans. As if fitting in isn’t hard enough, there’s an axe-swingin’ madman offing the womenfolk. With the murders given about as much serious attention as localised flu epidemic, the local law enforcement attempt to pass off the obvious slayings as accidents before eventually admitting there’s a psycho on the loose. (“She must have repeatedly fallen on the axe!!”)

Meanwhile, a computer geek called Gerald falls in love with moody Lillian, who thinks the killer is her cuz Charlie, whom she accidentally injured years before. Other useless subplots revolve around Gerald’s gold-digging bud Richard, who wants rid of his wealthy, older wife and cheats on her with another chick – and leaves the story totally unscathed!!!

Several primary victims don’t even get any lines apart from “aaaaarrrggghhh!!!” as the white-masked loon busts through doors at them. They are coded as hookers, gossips and cheats, while the menfolk are nowhere to be seen when the killer puts in another appearance.

Larraz manages to create some tension from time to time but the film peaks with the opening axe ‘em up at a car wash and its climax appears slightly skewered once all of the red herrings are eliminated, with a motive so contrived and unlikely – how convenient was it that all the intended victims were so local? It’s better than his sophomore slasher, Savage Lust, though.

Blurbs-of-interest: Page Moseley was in Open House; Jack Taylor was in Pieces.

tagged with accents from hell, Euro-horror, Nu-di-ty, slasher, the 80s