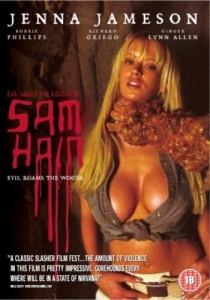 EVIL BREED: THE LEGEND OF SAMHAIN

Laughter Lines: “If you leave, you’ll disappear just like every other B-movie character does.”

Production problems plagued this Canadian gorefest, originally titled the pitheir Samhain before much of it was re-shot without the director’s input and reportedly the final cut is a far cry from the original vision.

Chasey Lain and Richard Grieco are the first to go in the obligatory pre-credits slaughter – quite why so many North Americans are camping in Ireland at the same time is a mystery. Then it’s pretty much death after death for the remaining characters, including a neat knife-in-the-mouth and a decapitation-by-wire, but the sight of one poor schmuck getting his intestines ripped out through his ass is a bit of a stretch the mind is less willing to reach. Elsewhere, Jenna Jameson is gutted by one of the cannibals, who then attempts to chow down on one of her silicone implants!

Considering 13 seconds were scissored by the BBFC, there’s still a hell of a lot of gore on show, but a good half of the killings occur off camera, leaving a lot of unanswered questions, while the cobbled-together footage jumps all over trying to sustain the plot.

The nostalgic approach to the midriff earns this three stars.

Blurb-of-interest: Neil Napier was in Slashers.

tagged with after they were famous, Canuck, Friday the 13th, gore o'clock, Nu-di-ty, slasher, what the hell!?