You’ve been framed. And skewered. And slashed. 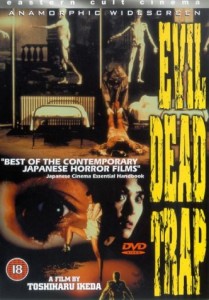 Contrary to the implications of that title, this oddball Japanese film has more in common with Saw than Sam Raimi’s splatstick classic, and was something of a collectible outside of its home territory after release.

Nami is the presenter of one of those late night TV shows that screen weird and wacky videos sent in by the public. One day she receives a tape containing the torture of a young woman, who eventually gets a blade through the eye (its gruesomeness shown in extreme closeup).

Due to the falling ratings, Nami asks if she can take a film crew to the location of the video as she thinks it will make good television. She is denied permission and so goes anyway, taking four colleagues and a still camera.

The film pads comfortably through derivative stalk n’ slash territory, with a pair splitting off from the group for sex before the victims start to wander into traps, which include a multitude of blades skewering one woman, and a rigged crossbow ambush. There’s a also a brilliant flash-strobe attack in the dark, which, along with some ambitious set pieces drew comparisons to Argento’s visual flourishes. With all the slaying done with in the first half, events take a detour down the weird path with one of the most bizarre twists occurring once the (obvious) killer is unmasked.

The film’s leanings towards violence against shrieking young women makes for some uncomfortable moments, while the fewer male victims are either killed all too quickly or entirely off-screen, a motif common in the staple ‘J-horror’ exports of the 90’s and 00’s, which commonly center around young women in distress.

Fundamentally, the photography and inventive demises make the film, which is otherwise your common-or-garden stalker with a particularly surreal what-the-fuck!? final forty minutes in a flick that essentially runs about twenty minutes too long.

The sequel is an entirely different affair, a dreamy, wannabe avant garde horror film that I’m not even sure I made it all the way through.