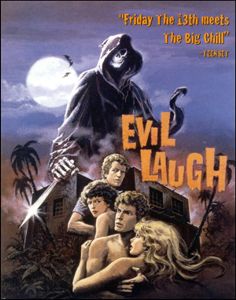 “Ten years ago something terrible happened in this house… This weekend it’s about to happen again!”

Aside from having one of the best covers going, Evil Laugh also has a great backstory: the ‘present day’ teens, led by Scott Baio’s bro Steven, are staying in a condo that was converted from a foster home. A decade earlier, the children in the home falsely accused one of the carers of molesting them. Understandably peeved, he returned once in the clear and cut the throats of the children and set the place on fire. Cooooool.

I used to know Howie Weiss, who played Mr Burns, who didn’t exactly have the fondest of memories making the film. Possibly because he got a machete in the balls! He’s a celeb columnist now. In some ways, the film plays like the proto-Scream, with one dorky film character spouting slasher movie clauses once the killin’ begins.

Med students go to ye olde foster home OF DEATH for a weekend to scope it out as one of them is thinking of buying and restoring it. But they’re stalked n’ slain by the creepy killer, who even manages to do away with one poor fella by microwaving his head – despite the door remaining open! Once revealed, the fiend’s motive pays homage to the film Evil Laugh so clearly wants to be. Unfortunately, its endearingly naff qualities of lame set-ups and sloppy gore effects ensured that never came to be.

At least there’s the sometimes clever one-liners, the VIDEO MONTAGE of the thirties-pretending-to-be-teens group cleaning their house in their super-80s tight shorts, tucked in vests and big, big hair. Despite managing to both suck and blow, this is one any genre fan should try to see.

Blurbs-of-interest: Kim McKamy was also in Dreamaniac; director Brascia played Joey, the kid who got axed up by his ‘friend’, in Friday the 13th Part V and was also in Rush Week.