EYES OF A STRANGER 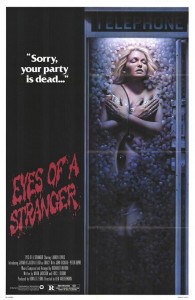 The number of coincidences that occur throughout Eyes of a Stranger is phenomenal: from the killer managing to appear anywhere necessary in order to eliminate his quarry to sudden regain of sight and speech!

Loveboat‘s Lauren Tewes is Jane, a plucky Miami anchorwoman convinced that a neighbour of hers is the man responsible for a series of local rape murders. Ignoring her lawyer-boyfriend’s advice, she does a little investigating and ends up endangering her blind, deaf and mute sis (Leigh), who was the victim of a murderous rapist as a child.

Most of Tom Savini’s gore effects were removed before the film was even released with an additional minute and a half cropped from the UK video, but it still pissed off feminist protesters to the point where they picketed movie theatres as the repulsive, slobbish maniac slaps, punches and slaughters a string of female victims (as well as a couple of guys who get in the way). The opening murder is adequately executed with some scares that aren’t so dissimilar to a certain Kevin Williamson-scribed box office hit but those that follow are sorely in need of chase action or grue. We can all see where it’s going to end up with psycho-dude (DiSanti) attacking see/speak/hear no evil girl and Lauren coming to the rescue.

Without Savini’s makeup work and so many missing links, Eyes of a Stranger is just another sleazy, dismissive throwback from the days of yore. And will somebody please explain how so many of these guys successfully crawl into the backseats of womens’ cars!?

tagged with before they were famous, Nu-di-ty, slasher, star power, the 80s