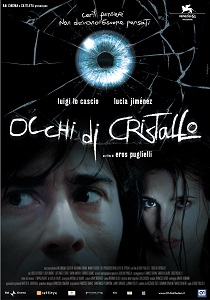 A late-to-the-party giallo which features a mystery taxidermist hacking up people in an effort to make a human doll, a la Pieces, but with about a million times as much class.

Homicide detectives Amaldi and Frese, who are undisciplined and violent and weathered respectively, find themselves in the centre of a whirlppol of seemingly unrelated events after the triple shooting of a pair of young lovers and a peeping Tom in a field. But what has it got to do with student Giudetta’s apparent obsessed stalker, and their ex-cop friend Ajaccio, who is in hospital suffering flashbacks to a fatal fire at the orphanage he grew up in?

All the staples of giallo are present and accounted for: Opera, sex, eyeballs, and a lot of blood. The latter is subdued enough to avoid looking excessive and stupid, and Puglielli keeps his film engaging considering the almost two-hour run time and non-stratospheric body count, never shying away from visual flourishes and striking shots littered throughout.

As always, all of the random threads eventually come together, while the killer’s motive is cloudy and bizarre, the film is slick and successful in its attempts to resurrect the ways of olde.