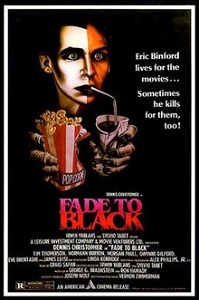 “Eric Binford lives for the movies… Sometimes he kills for them too!”

Awkward thriller-with-slasher-trim works mainly because of Dennis Christopher’s performance as Eric, an orphaned young man obsessed with the movie world and everything affiliated with it. Outside his dead end job, he takes abuse from his infirm aunt and eventually plucks up the courage to ask cute Monroe-a-like Kerridge out on a date, which she accepts, but is late for, contributing to his imminent meltdown.

He begins to dress up as various movie characters – Dracula, The Mummy, Hopalong Cassidy – and doing away with various people in his life who humiliate or embarrass him, including a young Mickey Rourke as an obnoxious co-worker. Also for the chop are a mouthy hooker, and the B-movie producer who steals Eric’s idea for a film.

A subplot concerning a criminal profiler and his relationship with a sexy cop gets in the way, but this leads to both parties eventually meeting at the Hollywood premiere finale, where things grind to a particularly abrupt halt with little resolution.

A good idea on paper, but possibly too much of a trivia-fest to register as the genre staple it aspires to be.

Blurbs-of-interest: Peter Horton was the lead in Children of the Corn; Tim Thomerson was later in Devil’s Prey.

tagged with before they were famous, the 80s, yo! Hollywood