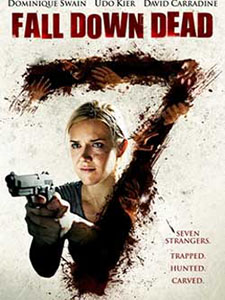 In 2006-07 I went backpacking around Asia for six months and, with a lot of time on buses, waiting at train stations etc., devoured an awful lotta books, trading them in at backpacker stops and hostels. I was particularly into James Patterson’s Alex Cross series at the time, finishing a book in about three days usually.

However, anyone who has read this series will surely attest that the awesome beginnings of Along Came a Spider and Kiss the Girls soon descended into my-first-psycho-thriller crap Double Cross and The Big Bad Wolf. (Mary Mary was the last one I got any mileage out of).

Anyway, the serial-murder-by-numbers nonsense this once great series has become is like a blueprint for Fall Down Dead, a film so dated I could swear somebody found an unsold giallo script from 1978 in a drawer and filmed it without bothering to bring it up to date.

The Picasso Killer is busy slashing up the women of some nameless big city, which is also victim to recurring power outages. He removes parts of their skin or whatever and uses it in his art, blah blah blah. One night, forward-thinking waitress Christie is assaulted by a homeless guy and does what all victims should: She runs into a dark alley. 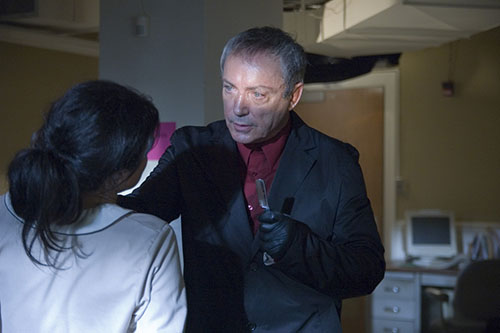 There, she finds a woman dying of razor wounds and is accosted by the Picasso Killer, eventually getting a security guard at the Hitchcock Building to let her in. A couple of detectives show up just as another blackout occurs, knocking out the phones and lights, essentially locking them in, plus a couple of office workers having after-hours nudie time, and a cleaner, inside the building. With the killer. On Christmas Eve.

Fall Down Dead is one of those late night cable affairs where you can pick out who will die and in what order from the moment they grace the screen. Somehow it made it to a theatrical release in certain parts of the world! Areas where they still think Patterson is anything but a marketing brand in the guise of a serious writer, I guess.

Suffice to say, Picasso slashes or shoots (aww…) his way through everyone who isn’t Christie or the down-on-his-luck cop until it’s a cat and mouse game.

Kier’s accent and would’ve-been-scary-pre-Lecter performance saves things from total meltdown, but just about everything else should warrant a title change to Fail Down Dead: Swain, who began her career in the title role of Lolita, and then Face/Off, is cookie-cutter single-mom-working-as-waitress stuff, but the script is so steeped in its mandated view of gender politics that she can’t fire a gun and needs a man to save her at every turn. 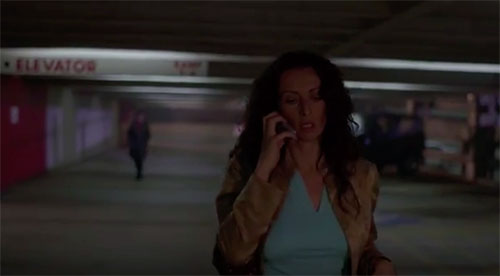 The other characters are just as contrived, from the troubled cop, to the happy cop, the Latino cleaner who clutches her rosary beads and whines instead of kicking the killer in the balls and running for it, David Carradine’s crotchety nightwatchman, and the sex-couple with as much depth as a petrie dish. They also come complete with Captain Obvious dialogue: “I can’t believe the power went off – now I have to walk down all those flights of stairs.”

Kier’s theatrics towards the end are amusing (“You piss me off!” he growls when Christie won’t just surrender and let him slash to to ribbons), but sadly even he can’t resuscitate this lost cause.

Blurbs-of-interest: Kier was also in Pray for Morning and (apparently, but I didn’t notice) Rob Zombie’s Halloween plus The Editor; Carradine was in Children of the Corn V, Detention, and Trick or Treats; Jon Keeyes also directed American Nightmare.

tagged with after they were famous, get your own ideas!, Nu-di-ty, slasher, who finances this crap!?, yo! Hollywood