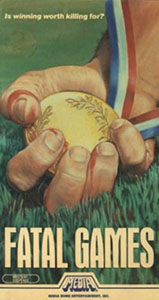 “The second prize is death.”

A.k.a. The Killing Touch / Olympic Nightmare

Here’s a javelin-tastic flick that’d be great on a double bill with Graduation Day. At an exclusive athletics training academy, a group of promising young Olympians – known as The Magnificent Seven – are threatened with extinction by a hooded maniac who tosses a mean javelin.

Amongst the array of convenient suspects are their strict coach, their steroid-prescribing doctor and the lesbian swimming coach, who’s involved with one of her proteges. Or it could be an envious ‘friend’? The sprintin’, tossin’, bar-spinnin’ teens are eliminated for good as they find themselves alone, usually working out or relaxing in the steam room afterwards – a fate which befalls one very unlucky young lady, who runs buck naked around the entire school trying to escape from the loon!

Points are lost for shaky editing, horrible incidental music, “uneven” performances and just a total lack of credibility – especially during the killer’s exposition, which is given away in most reviews of the film, robbing it of the actually-okay mystery element it trades on. As it turns out, I love the identity of the killer and how ludicrous the motive is.

Elliot’s direction is pedestrian but adequate, shooting some action from about three miles away from where’s it’s happening. But the killer is so accurate with the stick that he could skewer a teen from the other side of the Atlantic, yet the final girl (Annie) fleeing down a corridor proves more than a match.

Likeable characters, some funny humour and a general feeling of unrewarded effort don’t mean the film is as fatal as it’s largely made out to be. Yeah, it’s crap, but it’s lovable crap. Like a manky dog. Linnea and Brinke only appear in the background briefly.

Blurbs-of-interest: Sally Kirkland was later in Fingerprints and Jack the Reaper; Nicholas Love was in The Boogeyman. Marcelyn Ann Williams, under the name of Spice Williams-Crosby, was in Dead End Road.

tagged with hair don'ts, Nu-di-ty, slasher, slasher films that aren't supposed to be funny but are funny, star power, the 80s, what the hell!?