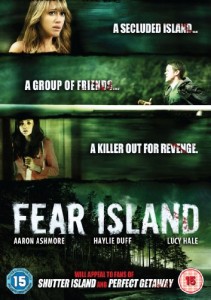 “A secluded island… A group of friends… A killer out for revenge.”

Laughter Lines: “I was looking for [the dog]!” / “With a fucking killer out there? What, were you thinking ‘Gee, I wish I was dead!’?”

“Will appeal to fans of Shutter Island,” the DVD box says. Really? Really?

If it never achieves anything else, Fear Island can, at the very least, claim that it taught me there Hilary Duff and Haylie Duff AREN’T  the same person.

The one that’s in this tame little whodunit is Haylie. She’s the last girl standing when cops arrest her in the forest on a private island. All her friends are dead. They think she did it. She says she can’t remember anything, even her name.

After a while, she remembers her name is Jenna and that she and four friends took a boat out to the lush vacation cabin owned by brothers Tyler and Kyle (or, more likely, their parents). The gang will all be going off to college (or possibly jobs, the actors were all way past their “I can play a convincing teen!” years) soon so this is their last hurrah. A young stowaway in the form of Megan (Hale) appears, claiming she just wants to hang with the popular kids. Curious, eh? 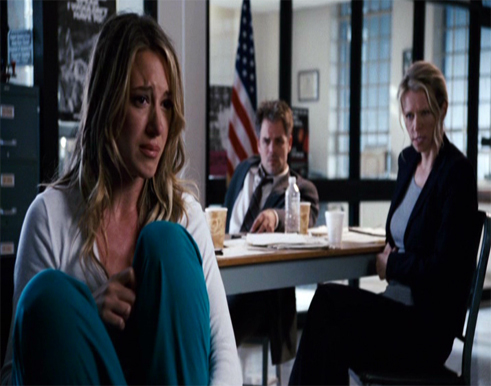 Small creepy things begin to happen; a toy monkey on a bike that is repeatedly found whizzing about, nails in the jam, and the catalyst that gets things moving – the missing dog. As people go looking for said dog (one of those Chihuahua-sized yappers, quite possibly an actual Chihuahua), the first body is found. Then somebody is locked in the hot tub with the temperature set at the maximum, another disappearance, rattlesnake in the cupboard…

Each event is iced off with random clues left by the perpetrator: Revenge, Evil, Guilty, Innocent, Naive, Atonement… Oh look, they spell out the name of a missing girl! Fear Island changes tack to become I Know What You Did on Your Poncey Private Island Last Summer when it’s revealed there are some dodgy secrets flying around and Jenna is soon on the run from the unveiled killer… 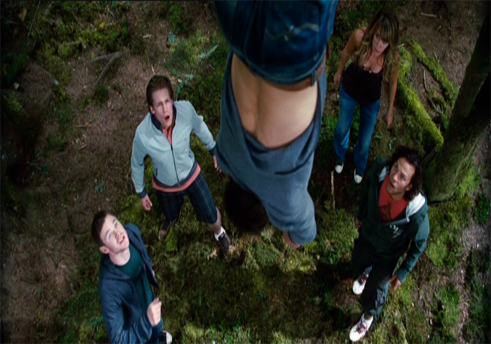 As the story is punctuated by ‘present’ moment interviews between Jenna, a cop, and a forensic psychologist, initially cop dude hounds her towards confessing, while doc lady keeps defending her – but they soon switch places as doc lady start to notice inconsistencies in the story.

There is a big twist and, in richer hands, it could’ve been a real blind-sider. As it is, it’s good enough, albeit obvious in the couple of minutes before the big reveal. But until that point I didn’t have it figured, so Fear Island is at the very least operating at a decently mysterious level.

Elsewhere, we must ask ourselves WHY the people involved in the traumatic past event would EVER return to the island where it occurred if they were trying so hard to keep it a secret – and to party, no less!? Talk about dancing on somebody’s grave! 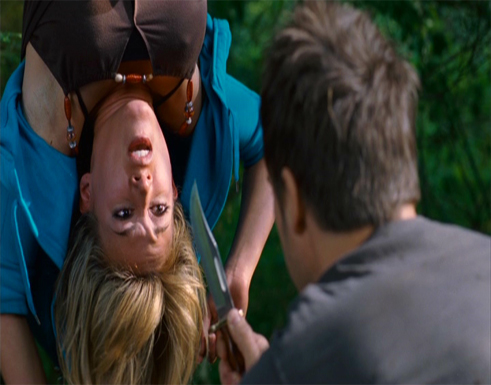 Ultimately a passable, gore-free, sort of entry-level slasher film that plays out like a Diet Harper’s Island, with shades of April Fool’s Day and Pretty Little Liars (which ironically stars Lucy Hale). Decent for a one night stand.

Blurbs-of-interest: Martin Cummins was Wayne in Friday the 13th Part VIII: Jason Takes Manhattan; Lucy Hale was in the Stab 7 part of Scream 4; Jessica Harmon was in Hollow Man II.