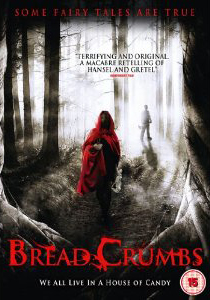 “We all live in a house of candy.”

A curious little endeavour featuring the talents of several genre buffs who worked on or starred in various Halloween-related ventures.

One of those strange experiences; BreadCrumbs starts out so well that I was thinking it could be the first 4-star slasher film I’ve seen since Mask Maker. That’s not to say early scenes (featuring Klebe of the Rob Zombie Halloween remake) will blow anybody away, but once the main crop of characters is introduced, they come with efficient and well-delivered dialogue, and – for once – seem like a nice bunch of folk who DON’T hate one another’s guts. A rarity in modern body count flicks.

Sadly, BreadCrumbs loses the trail just after the halfway point, once the horror begins.

The residents are soon frequented by visits from oddball teenage siblings Henry and Patti, who seem content to run around playing childlike games, carrying dolls, or staring in windows. That is, until the violence begins…

Once people start dying, the wheels work loose on the vehicle and BreadCrumbs becomes little more than any other DVD kill-fest, highlighted only by ongoing questions surrounding the brother-sister threat (if indeed there is one) and comparing Hagan’s final girl performance to her likable turn as Kara Strode back in 1995.

The murders are tame, largely off-camera and some are just hazarded – some people more or less vanish into the clutches of the killer and are never seen again. The lack of tension is damaging, especially as the characters worked so naturally in their early scenes. Now, when they turn on each other, stupid decisions are made where it didn’t look so likely before, and the usual “fuck you!” / “No! Fuck YOU!” interchanges ensue. 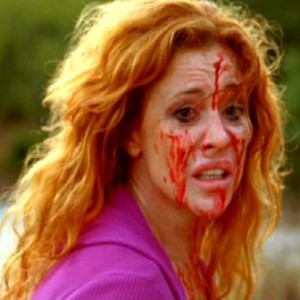 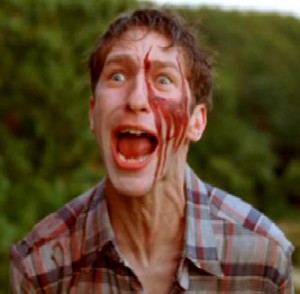 And the opening scene (with Klebe) is never again referenced.

A real shame in many ways, but also hopeful that perhaps these guys will work with a higher budget and a more well thought out story sometime in the future that could deliver something really good. But I DID say that about Madhouse as well…