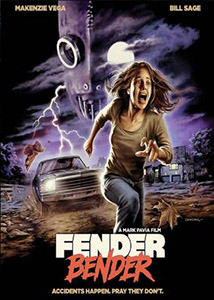 Channeling the fuck out of When a Stranger Calls and Halloween, this reasonably tense back-to-basics slasher film turned out to be a pleasant surprise.

Starting as most do these days with a woman alone in her house, spooked by some weird texts from the guy she had a clang with, I feared that this was going to be one of those films where all the energy went into a creepy opening only to flatline during the main event. The opening is very nicely done, with focal fragmentation galore, harking back to the slashers of olde where the audience was on edge asking from where the killer would pounce.

After this denouement, aerial shots of the killer’s car driving away and along the highway accompany the credits and it’s clear that there’s some talent at play here. While most people (on IMDb anyway) moan at the lack of boobs, blood, or poor decision making of characters in this genre, they always seem to miss production quality, hence they’re happy watching tripe like Sigma Die!

Anyway, the creepy black car (not too far removed from that of 70s awesome-pic The Car) cruises to a town in New Mexico and rear-ends shy teen Hilary, who has literally just discovered her jock boyfriend is playing away, and taken the car without her strict parents permission. She and the driver/killer exchange details in an uncomfortable scene and she’s on her way to be scolded for her behaviour and bounced from the family trip to see some show somewhere.

Home alone, Hilary receives apologetic texts from the driver, who seems to know more than he should about her, and finds an apology cake left on the roof of her car. From the driver, or from the boyfriend? Soon after, it becomes apparent someone has entered the house, but she starts to relax when her BFFs Rachel and Erik stop by with pizza.

We know what’s going on, but they don’t, and when Boyfriend comes by drunk and is ejected, he’s quickly slashed to ribbons outside. The others decide to eat the cake but are interrupted by a call from Hilary’s insurance company, informing her the details provided by the other driver belonged to a woman found murdered, like, last night!!! It’s not so far removed from: “The calls are coming from inside the house!”

Under siege thereafter, it turns out the cake was pumped with drugs and both Erik and Rachel are hopeless against attack, but Hilary, who stopped short of a bite, is primed to fight back, and fight back she eventually does once the running and the screaming become futile.

It’s fair to say there’s a thick wad of bad decisions made on her part, from the usual beat-the-killer-then-look-away-for-long-enough schtick, to dropping weapons, backed up by the contrived cliches of bad phone reception, a raging storm, and a loon whose skull is apparently forged in steel. But if characters did the sensible thing, there’d be no slasher films at all. Hell, given all these movies, has there ever been a case of a string of teens hunted down one by one by a vengeful blade-wielding stalker IRL?

Fender Bender is a testament to what can be wrung out of limited options thanks to a good director’s eye. I’ve no idea what the budget was but don’t imagine much money is thrown at slasher films anymore. Vega – who was excellent as Julianna Margulies’ daughter in The Good Wife - doesn’t exactly have hordes of depth to take on with her character, but steps into the final girl shoes well when she decides enough is enough, and the downbeat ending feels disappointingly necessary. 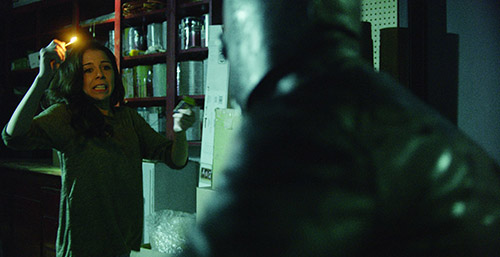 A well above-average flick, restrained and a little bit arty, bound to disappoint the types who take to message boards to mourn the lack of nudity, and flexing some directorial muscle too rarely seen in the genre these days.