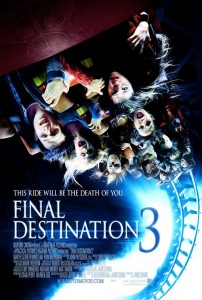 “This ride will be the death of you.”

The prospect of Final Destination 3 was a good one: the first two films were awesome, a neat pair, original director and writer returning – what could go wrong besides, y’know, all manner of mechanisms, sunbeds, power tools and gym equipment?

Originally intended to be the 3D one, the project was deemed impossible given the opening disaster would be set aboard a doomed rollercoaster ride but, for all intents and purposes, the script still suffers from the familiar shortcomings that most 3D have, i.e. hardly any character development whatsoever.

FD3 is almost a remake of the first film with a new catastrophe shoved in place of that plane crash: high school graduates at an amusement park board a towering rollercoaster which, in the premonition of, once again, an insta-psychic teen (Winstead), suffers a crash that kills all aboard.

The idea is awesome, the effects work above par but the disaster plays out just that little bit too unbelievably: the train seemingly goes around once unscathed before hitting an on-track object that breaks the wheels, damages to hydraulics, disabling the safety harnesses before half the cars career off the tracks and the trailing carriages grind to a halt, upside down at the top of the 360 loop.

I mean…c’mon, exactly at the top of the loop? And where do the extra corkscrews come from? What’s more, the character who inadvertently causes the incident is among those who leave the ride once premonishee Wendy freaks out and manages to ‘save’ nine others from the accident.

After a nicely done aftermath scene where we witness Wendy’s misery at losing her boyfriend, FD3 boards a carousel of repetition: Death comes along to hoover up the survivors in the order they were supposed to blah blah blah… But unlike the previous films, there’s little else, each scene is punctuated by interchanges between Wendy and fellow survivor Kevin, the only two who find something hinky in what happened.

Nobody else shows any gratitude whatsoever for having their life saved and, furthermore, given the massive evidence that Wendy is, like, psychic or some shit, none of them even consider that there’s any truth to what she’s telling them, the urban legend that was Flight 180 and a variety of other weird coincidences mentioned.

Instead, they idle on with their soon-to-be-over lives and become victims in what’s presently the most sadistic film of the franchise. Wendy herself exclaims that the demise of a classmate she and Kevin witness is incredibly vicious.

While the level of suffering is amped, the IQ of the characters slumps: the first to go in a double-whammy are two airhead chicks who strip off for a tanning bed session and end up burnt to death. It’d be alright if the girls were nasty bitches but despite being as dumb as a box of hair, they were nice girls who reached out to comfort Wendy. So we see them topless before they’re horribly killed off. Titillate > exterminate. 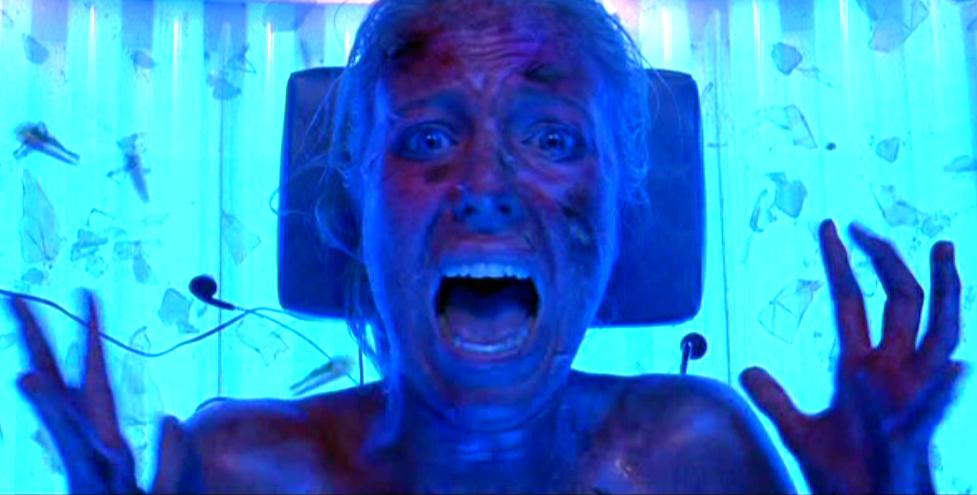 Fortunately, the rest of the kills are less cruel and far more creative, all of them linked without explanation to photographs Wendy took before the rollercoaster crash. Once again, what force is providing these hints? What force ‘gave’ Wendy the premonition? And what force that seems keen on helping them out do they not bother to investigate at all? Life? Visit a spiritualist, you morons!

As it goes, there’s death-at-the-drive-thru, a jock who shouts cliches like “winning’s all I know how to do!” before getting clamped to death, a gruesome but very well done nailgun incident and some great stunts in the finale at a bicentennial fayre. A couple of the lesser characters provoke interest, the goth duo of Ian and Erin would’ve made more intriguing leads than the template all-American teens of Wendy and Kevin, especially as Ian is the only one to put forward some theories on mortality. 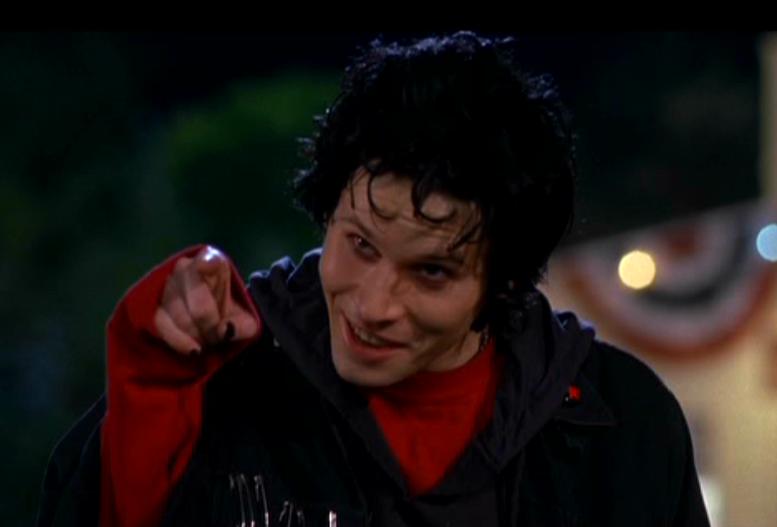 Strangely and in spite of the knowledge gained from researching Flight 180 et al, when the death of one survivor is ‘skipped’ thanks to an intervention and then loops back around to finish him off, the main characters don’t notice: they think the fact that they’ve been skipped means it’s all over despite being first-hand eyewitnesses to the demise of someone else who was skipped!

OK, it sounds like I hated it, but really, I enjoy this one: it’s got a great idea at its core and some awesome creative kills; Winstead makes for a functional heroine – spending most of the movie with her classmates’ blood spattering over her face (you think after the first two she’d learn to stand further away from who’s ‘next’) – though not as plucky as either Ali Larter or A.J. Cook, and things end with a downbeat but very well-realised second disaster.

Compared to 2009’s soggy “The” Final Destination it’s a masterpiece, sitting awkwardly between the higher quality first two films, production-wise it can’t be faulted (OK, there’s a bit of questionable CG work), awaiting the release of the fifth film this summer. It’s just that little bit too bloodthirsty and…unforgiving? The DVD extras reveal that test screenings found the original ending was unfavourable and New Line execs voted to kill all that characters, which is a bit of a depressing state of affairs that even the nice kids won’t be spared.

Entertaining but over-serious and emotionally void.

“Quick! Hide it – nobody wants to be seen dead wearing that!”

Blurbs-of-interest: Texas Battle and Crystal Lowe were in Wrong Turn 2: Dead End; Lowe was also in Children of the Corn: Revelation and the Black Christmas remake, along with Mary Elizabeth Winstead, directed and produced by Glen Morgan and James Wong respectively, and also featuring Kristen Cloke from the first FD; Ryan Merriman was Deckard in Halloween: Resurrection; Kris Lemche was in My Little Eye; Gina Holden was in Harper’s Island. Chelan Simmons and Jesse Moss (Wendy’s short-lived beau) were both in Tucker and Dale vs Evil.

tagged with before they were famous, gore o'clock, Nu-di-ty, sequel city, slasher, slasher films that aren't supposed to be funny but are funny