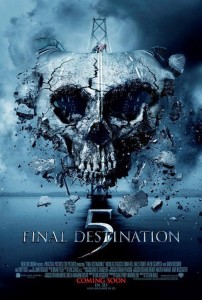 Hallelujah! A character finally acknowledges the force that provided the vision! It’s only taken 11 years for them to realise nobody’s ever mentioned that.

Will they ever stop? Crew and fans assumed they were stopping with 2009’s flaccid “The” Final Destination. But even though it was shit, it also made shit loads of money, prompting work on a fifth film – possibly something of an apology – which arrives a year earlier than the standard three-year gap between the other films.

The good news is that Final Destination 5 is shit loads better than the previous entry and maybe a little better than FD3 as well. Though the promise of a ‘back to basics’ approach is only half delivered, it appears that those behind the scenes took the project that little bit more seriously than before.

For the most part, the formula is un-fiddled with: a big disaster happens, which is foreseen by one of those about to perish whose hysterical reaction to his/her premonition saves a handful of people who are then hoovered up by the invisible force of Death in the following days and weeks.

So we had a plane crash, a pile-up, a rollercoaster malfunction and a raceway crash (that one really sucked, didn’t it?), 2011 coughs up a suspension bridge collapse. Unfortunately for a bus full of office workers on a ‘team building retreat’, all round nice guy Sam (D’Agosto) sees it all seconds before it happens. People are impaled by almost anything imaginable, crushed by flying objects, and for one poor guy drenched in burning hot tar. Sam succeeds in creating a scene that saves eight people from the bus.

The last two films sorely missed the presence of Tony Todd as the riddle-speaking mortician Bludworth. Thankfully he’s brought back to hang around the aftermaths of the ensuing deaths and utter a few cryptic words about Death’s grand scheme to claim the souls they skipped out on their scheduled suspension bridge check-out date. Though this time he states that if those in the firing line take another life, places are switched and they get that person’s remaining years. Kill or be killed.

In the meantime, there’s death by gymnastical dismount, acupuncture, laser-eye surgery and the usual menagerie of flying implements which take people out with a nano-second’s notice. It’s as grisly as usual but just that little bit less sadistic than the last two films, which showed such disregard for their characters that they become virtual parodies of themselves.


Interesting, this is the first film since the 2000 original not to show any tits. Have they now decided the series is above that kind of sleazy exploitation on top of bloody deaths for all? Maybe. Or maybe the three female actors just didn’t want to get their jugs out. Who knows. It doesn’t make a difference to me anyway.

What it does leave is a little more room for characters who, although hardly drawn out beyond their roles, are on the whole more likeable than before. Sam fulfills his part as the psychic to standard while Emma Bell of Frozen is his on-off girlfriend. Sam’s best bud Peter has the biggest arc after his girlfriend goes early on, slowly driving him a bit insane and leading to the kind of guy-with-a-knife action you just don’t see in Final Destination movies. There’s also a little more evidence of the grieving process at play, with the office employees missing their lost colleagues and commercial repercussions that the disaster indirectly causes.

Quale attempts to keep things on a sort of overcast drizzle level of grim but the comedic off-sets still creep in, mostly from P.J. Byrne’s Isaac, who is listed as one of the dead by the slave-driving manager during a memorial service and then completely forgotten about when mentioned later.

There’s a good attempt to change it up a bit come the finale, which sees the kill or be killed theory being tested and then we get the twist. It’s a real downer in the internet age that big reveals can be so easily and quickly spoiled for those of us unlucky enough to read just that one sentence too much somewhere.

Various people on the IMDb boards ruined it by giving away the twist ending, which, to be fair, I may have also given away by calling this post Full Circle. To say Final Destination 5 could close off the series is a decent assessment given how things end. It will hopefully provide a great OMG! moment for those who have no idea it’s about to happen.

Even so, the scene in question is brilliantly executed (again!) and elevated this from an average rating to being a notch about the third movie, thanks almost exclusively to this development and the general feeling that someone somewhere just TRIED a bit harder to make a good horror sequel rather than a box-ticking exercise.

A big question mark will hang over the possibility of a sixth film. I imagine this one will have done well enough to generate interest and there’s no shortage of ways to keep offing people but at the very least, they should lay it to rest for a few years to let the dust settle.

Blurbs-of-interest: Arlen Escarpeta was Lawrence in the Friday the 13th reboot; Courtney B. Vance (underused!!) was in D-Tox. Tony Todd was also in both Hatchet and its sequel, Scarecrow Slayer, iMurders, Jack the Reaper, and Hell Fest.