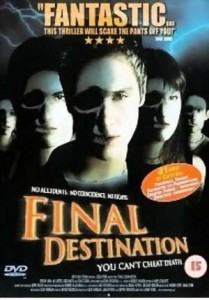 “No accidents. No coincidences. No escapes. You can’t cheat death.”

Dire-logue: “Because of you I have to sit here and watch…fucking Stuart Little.”

It’s strange to think how long ago the year 2000 was in film terms, well in any terms really. I was a carefree 21-year-old lapping up any and every dead teenager film I could find. The Scream franchise ended in that year (although recent rumours may suggest otherwise) and there were a lot of theatrically released slasher flicks: Cherry Falls, Urban Legends: Final Cut, Hollow Man, Scary Movie (when it wasn’t done to death). But this one beats ‘em all.

Done to death is a fitting choice of words, as it not only describes the premise of this film, but also what’s happened to it thanks to the degrading scripts for its three sequels, the most recent of which is due out later this year. Fresh from seeing the trailer for The Final Destination, I decided to blow the dust off the original film and give it another whirl. Truth is, I dropped half a star off. Yes, it still kicks ass, the plane crash still terrifies me and the bus moment has truly become part of horror history – but, I dunno, the film kinda wore out its welcome towards the end and I got a bit bored, my index finger flirting with the fast-forward option. 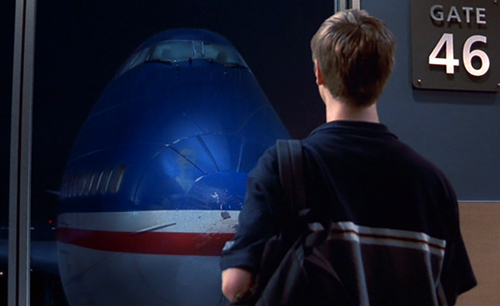 As if it needs introduction, Final Destination quite blatently re-tells the story of TWA 800 for its opening shock. High-schooler Alex (Sawa – where’d his career go?) is off to Paris on a class trip and is a little anxious about the 7-hour flight. And so he should be, no sooner are they off the ground, than the Boeing 747 starts to shake, rattle n’ roll, the cabin loses pressure, the fuselage splinters, kids get blown out into the void and they’re eventually eaten up by a wall of fire – then he wakes up. Minor coincidences tell him this was no dream and he causes a ruckus that gets him, five other students and a teacher ejected from the flight, which then explodes minutes later, much to the shock of those who were yelling at him seconds beforehand. 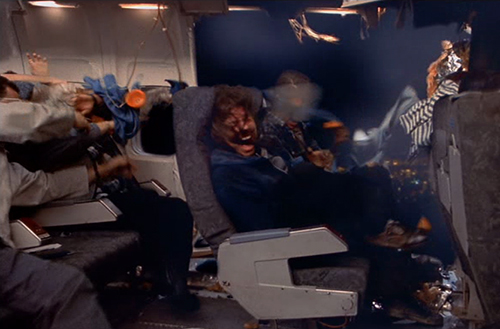 It’s the perfect urban legend. We only need to look at the aftermaths of similar incidents to read those stories of lucky souls who missed their plane to gauge what an impressive concept we’ve been given here. A few weeks after the incident, Alex finds his fellow ejectees start dropping dead in increasingly bizarre ways. A contrived trip to the morgue with weird girl Clear (Larter) culminates in a meeting with Tony Todd’s gravel-voiced mortician, who informs them that they cheated death, so now it’s coming back to collect on the debt. Ergo, instead of your standard whodunit, Final Destination is, rather, a howdunit… 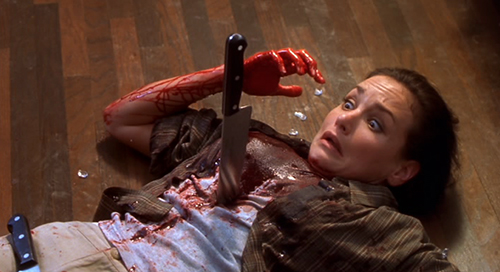 The victims are stalked by a dark blobby shadow that has the power to make taps leak, but more often than not just capitalises on the mistakes of its quarry: stepping out into the road, drinking vodka from a broken mug, slipping over on to wires etc. The deaths are impressively choreographed, occasionally funny and liberally bloody, though not nearly as much as in the follow-ups and often forecast by images and factors seen earlier on. The cast gel together impressively, with character traits and flaws used to give a dimension all but entirely absent in the ensuing films; Sawa is a good reluctant psychic and Larter an interesting heroine and their friends slightly less developed but equally affected by the guilt from surviving the plane crash. 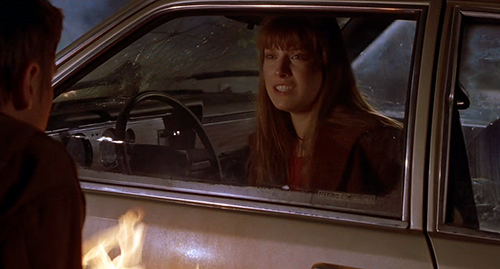 Because of the gravity of the plane crash and it’s terrifyingly realised effects work, things can only go down hill to an extent: no matter how creative death is, it can’t compare. Supposed rules governing the order in which the victims die are interesting but became suffocating in the sequels and tie-in novels and the shocker ending chosen over the original, softer final scene cemented the franchise, with a new film surfacing only every three years. Sounds like I’m down on the sequels, but I liked them – more than that, Final Destination 2 is loads of fun, 3 was good but sleazy and I imagine 4/The will follow the tried and tested plan. The fact that there’s no T&A in the first one is telling. Try to forget how contrived the whole concept became and enjoy it for what it is. 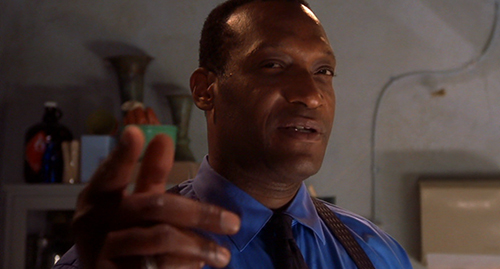 “I’ll see you soon… I’ve signed on for the sequel.”

Blurbs-of-interest: Larter and Todd returned in Final Destination 2 and Todd was back again for the fifth movie, and can also be seen in Scarecrow Slayer, iMurders, two of the Hatchet films, Jack the Reaper, and Hell Fest; Devon Sawa was later in the TV series Chucky; Kerr Smith appeared in the 3D remake of My Bloody Valentine. Kristen Cloke was in the Black Christmas remake, that was produced and directed by writer Glen Morgan.