Ungraded…the only thing worse than a fail 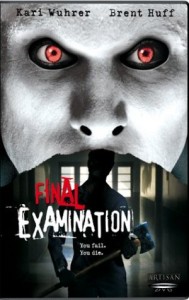 Dire-logue: “Just spell my name right, it’s Shane with a C…” what!?

A girl drives off the end of an unfinished bridge. Five years later, a cop busts a drug dealer and is then reassigned to Hawaii as a reward. In Hawaii, the sorority sisters from Big Island University have gathered for a reunion sponsored by a glamour magazine, which they are being photographed for by a wasted Rochon. Someone tries to murder them – failing, more often than not – reassigned dick and Kari Wuhrer (remembered by me as the “not J-Lo” female in Anaconda) investigate.

That’s Final Examination for you. It has nothing remotely to do with exams at all, bar the staggering two sorority victims found with test papers marked ‘Failed’ floating nearby. Instead, Fred Olen Ray’s (shoulda known!) dismal little flick is a thinly disguised softcore skin flick. The only examination present is the one the camera oversees while various starlets take showers or just walk around topless…

The cast look ridiculously bored and the police procedural plot (far outweighing any horror) is like a really boring episode of NCIS. There’s an equally insipid backstory unfurled to do with co-ed pregnancy, dirty tricks and cover ups that relate back to the dead chick and bitchy sorority alumnus Kristen – who doesn’t even die!

Ray overcompensates boredom with too many twists, none of which even flirt with being exciting. Turns out there are but three killers, all siblings of the dead girl and between them they manage to off a massive four people. Pathetic.

Chuck in a lieutenant named Hugh Janus and a scene where Kristen brandishes a gun several minutes before the killer busts through a door and attacks her friend. Does she shoot him? No. She hits him with the damn thing. The film finally ends with the dialogue “uh…yeah,” which appears to accurately sum up the opinion all involved likely have when asked about the film.

To spell it out for you in case you, like me, are hell bent on seeing ‘em all: Final Examination is not a good bad film, it’s really, really, REALLY boring, which is a far worse sin than simply being shit.

tagged with I want to die, Nu-di-ty, slasher, sorority, spoilers, what the hell!?, who finances this crap!?