Children of the railroad crossing 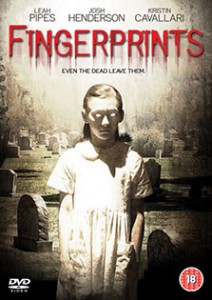 “Even the dead leave them.”

Laughter Lines:  “A hair test is the only way to be sure that you’re drug free!”

In the small town on Emerald, Texas, in March 1957, a school bus is hit by a train at a level crossing, killing all onboard. In the years that follow, an urban legend is developed that states if you park on the tracks with the car in neutral, the ghosts of the dead children will push you to safety, leaving tiny handprints behind.

This is naturally laughed off by newcomer Melanie (Leah Pipes, pre-Sorority Row), when her sister Crystal (Cavallari) drives her to their new hometown after a stint in rehab. Her nasty mom doesn’t trust her with anything, but Crystal introduces her to the local high school rabble, one of whom decides to put the local legend to the test, nearly killing a car load of them in the process. At the last second, Mel sees a young girl (one we saw killed at the start) stood on the tracks. Twilight Zone music please. 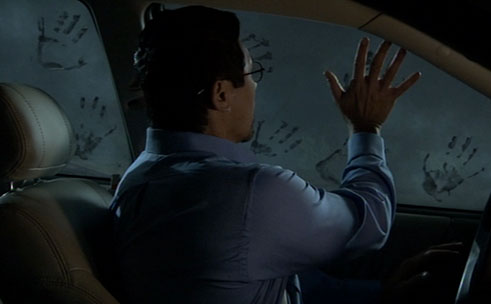 Slowly, some people come around the accepting the legend is real – although its origins, it seems, have been completely made up and Fingerprints ventures down a path not too dissimilar to Elm Street, with mob-vengeance, vital information hidden from the next generation, and cover-ups. Melanie is thrown into the centre when the conductor kidnaps Crystal; finds out the truth and unmasks the lunatic. Happy days.

The plot sounds overwrought and perhaps it is. Fingerprints is only a slasher film in the secondary sense, first and foremost it’s a tame ghost story, the gruesome slayings are a bit of an afterthought. Without them though, there’d be less motivation for the final girl to act, and it would simply be a fattened-up episode of Are You Afraid of the Dark?

Good production unities, the Krueger-lite revelations, and eventual identity of the killer (plus their rather awesome flip out) more than make up for a bit of a slow start. It won’t please gorehounds by any means, but there’s a decent little flick here. For another take on the tale, see – or rather don’t see – Munger Road (2011).

Blurbs-of-interest: Sally Kirkland was in Fatal Games way back in the 80s, and also Jack the Reaper; Josh Henderson was in the dreadful April Fool’s Day remake; Geoffrey Lewis was in 10 to Midnight and Out of the Dark.

tagged with after they were famous, get your own ideas!, Nu-di-ty, slasher, spunky final girl, star power