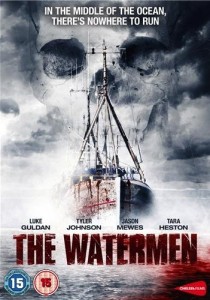 “In the middle of the ocean there’s nowhere to run.”

The seventy-eighth regional Xerox of Wrong Turn, but this one takes us back to Virginia. Or to be more accurate about it, Chesapeake Bay on the coast of Virginia.

Six “young people” go on an offshore cruise led by millionaire brat Trailor (Mewes, who doesn’t seem to want to be there for long) and find themselves stranded without electrics, water, or flares, until a rusty old fishing boat comes along and ‘rescues’ them.

They’re zonked by drugged water and taken back to the expected dirty ol’ shack by The Watermen, who intend to slice them up and sell them as top of the line crab bait, because it costs so much to gas up a boat, fish in depleted waters blah blah blah… 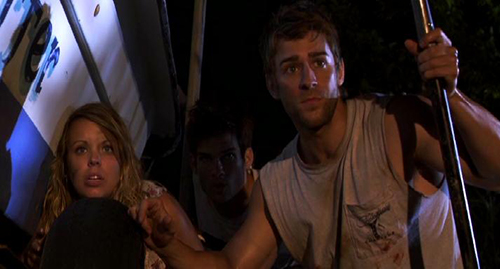 Escape attempts are thwarted, some of the “kids” die, and they retaliate with feeble force, successfully offing only one of the numerous villains; slicker-clad Creole-types with long wet hair, beards, who grunt inaudible lines of dialogue and can seemingly survive almost anything.

While it’s passably interesting enough, the characters are awful cookie-cutter drones. The girls are especially moronic and incapable, including drippy heroine Diane, who has to be saved several times by muscular golden boy Mike, while her two friends are shallow, gold-digging airheads present only to appear topless and whine before they are summarily killed off.

Later on, another character is badly injured and seemingly on deaths door, but five minutes later can run around and haul barrels at will. Another person completely disappears from the film altogether and the lack of bad guys who get a dose of their own medicine is depressingly naff. 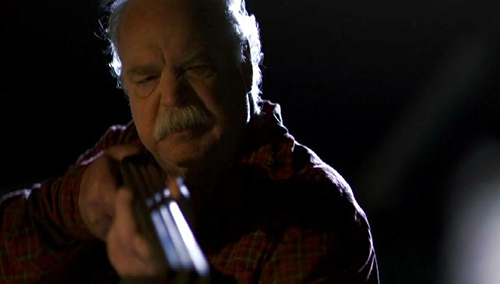 Competent enough if you really wanted to see half dozen I Know What You Did Last Summer fishermen going Wrong Turn on a group of forgettable idiots – but who would?

Blurbs-of-interest: Mewes was also in RSVP and The Tripper; Richard Riehle was in Hatchet and Texas Chainsaw 3D.

tagged with Nu-di-ty, rip-off central, slasher, spoilers, weird-ass twist, what the hell!?, who finances this crap!?