Cloak and Dagger. And Axe. And Hammer. 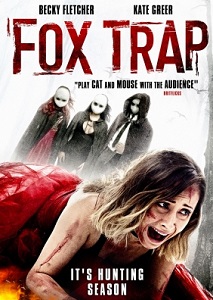 A very nicely put together and impressively acted British slasher mystery, which is thankfully closer in quality to Braxton Butcher than it is the Unhinged remake (ironically featuring the lead actress here), or 12 Deaths of Christmas.

Eight years (OMG, not ten!!) after their stupid prank leaves a girl paralysed, the responsible group are invited to a bogus reunion at the remote country house of a girl murdered at the start. There, they’re all in receipt of boxes containing creepy dolls, and a Truth or Dare-type card game that aims to shine the light of truth on what they did.

Frankie (Fletcher) took the fall for everyone and ended up doing time; Anna is genuinely sorry and will do anything to repair their broken friendship; ringleader Connie didn’t give a fuck then and doesn’t give a fuck now. With a couple of extra boyfriends in tow, a killer wearing the same cloak and white mask combo used in the gag rocks up and starts to do away with them by axe, hammer, and cellophane.

While the film follows the expected route of discovery, panic, failed attempts to drive away for help, the creators have thankfully taken extra care to use players who can actually act well for the most part, set up decent shots (the coat hook moment at the start is a little gem of a shock), and write good dialogue for the tension-thick scenes when the past crime is discussed over dinner.

Fox Trap runs maybe 10-15 minutes too long and the identity of the killer isn’t much of a challenge to guess, but there still are plenty of nice developments as we go, from Frankie and Anna discovering a room with the fiend’s plans neatly laid out, a good chase scene, and even a mercy killing. This benefits from not straying too far from tried and tested groundwork, carefully tweaking the tropes of its situation to its advantage. Good stuff.

Blurb-of-interest: Becky Fletcher and Kate Greer (under a different name) were in the aforementioned Unhinged.