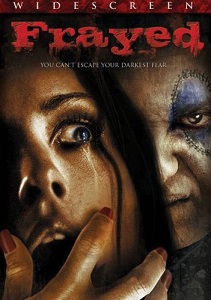 “You can’t escape your darkest fear.”

Laughter Lines: “I know how to warm you girls up – every time I fart, you guys drink.”

This was headed for 2-star city for about 105 of its 111-minute running time. Unavoidable partial spoilers follow, because when I happened to read the five words “if you’ve seen Haute Tension…” I thought I had it all figured out.

In September 1994, five-year-old Sara’s birthday party is hijacked by her annoying older brother, Kurt, who is sent to his room by his mom. She later comes to talk to him and is thanked by being beaten to death with a baseball bat and little Kurt is packed off to an institution.

Years later – thirteen, I’m guessing (yay! it’s not a multiple of five!) – the doctors at the clinic feel he’s failed to make significant progress and arrange for him to be transferred elsewhere. Meanwhile, his father, the local sheriff, allows Sara to go camping with her BFF Vanessa, much to the annoyance of her stepmother. 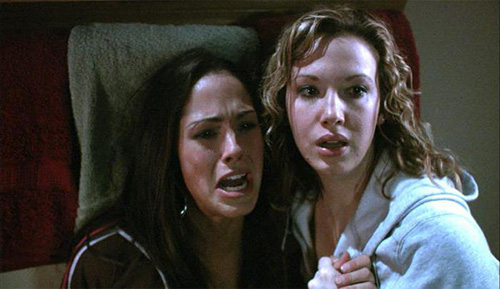 We cut to a young security guard frantically searching the woods when he takes a tumble – or is shoved – down an embankment. He’s rescued by a motorist but they are attacked by a clown-masked psycho who kills the driver and accosts him through the woods. In this scene, some 25 minutes through, I figured out that the guard and the killer were one and the same. From this point on, only he sees the loon, yelling about his presence all the time, but nobody else ever reacts to the killer, only ‘Gary’s’ shrieking that he’s coming.

The focus eventually drifts back to the family home where brother and sister will face off. He realises who he is (or isn’t, whatever), lots of “get out of me!”-style antics ensue until Papa comes home brandishing his gun. I confess I yawned, wondering how it had a fairly favourable IMDb rating after extended scenes of girls hyperventilating in their hiding places, off-camera killings, and too much talk, with the big “the call is coming from inside the house!” moment skewered by the fact this revelation was obvious an hour ago. 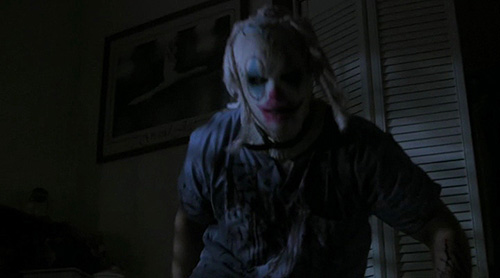 But then… Frayed goes one step further and then another step, hurling twists all over the show, ending the film in a very grim, downbeat way, but at least one I didn’t see coming a mile off. It’s as if they used the Haute Tension twist to cover up for the mechanics of the real twist happening underneath. Still, the film is in dire need of a good 15-20 minutes being cropped off, as the midriff is hard terrain and more focus could’ve gone into making the stalk-n-slasher section better, but just about worth it for the eventual payoff.