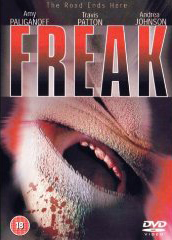 Despite recently being included in my rundown of Crap Killers, Freak is a gritty regional thriller with a budget of about six dollars, produced over a three year period.

Under the evident influence of Halloween, we meet sisters Staci and Jodie (the latter adopted and a girl-vers of Peter Billingsley in Death Valley) travelling from Indiana to Virginia Beach in their orange VW bug to relocate after their parents died.

Halfway across Ohio they cross paths with an escaped mental patient named Keller whose head is covered in bandages. After escaping custody, he first tries to run them off the road, but later settles for kidnapping Jodie while his probationary transport/guardian drives around frantically searching for the ‘harmless catatonic’, who, known only to the audience, murdered his nasty mom nice years earlier, after she gave birth to a little sis who was put up for adoption. You see where this is going?

Elsewhere, Keller the Killer commits a grand total of two murders (both off camera), indicating that this isn’t going to meet the needs of gorehounds, which begs the question why is was given an 18 certificate?

Instead, Freak is a mission of visual stylings and representation of a rather bleak Americana where the events unfurl: true to life, everything that occurs is laced with a depressing realism of the unsensational, giving it an advantage of less subtle road-movie-horrors such as Detour and Roadkill.

What prevents this earnest little production from crossing over is the lack of further characters, and not much in the way of action of ejector-seat scares, plus we never learn if Jodie is in fact Keller the Killer’s sister, and her pet ferret is lost and never mentioned again. It’s the type of film that you could only really watch the once.