Quite a long review of Freddy vs Jason 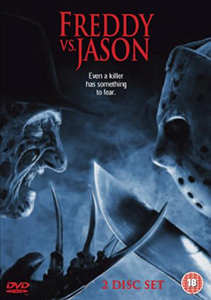 “Even a killer has something to fear.”

Laughter Lines: “I’ve got some good advice for you. Coffee. Make friends with it.”

The concept of Freddy Krueger facing off against Jason Voorhees was every fanboy’s dream back in the 80s when it was first pitched. Though I always considered Jason vs Michael Myers as a more viable outing, as both exist in the ‘real’ world.

Back in 1988 when the concept was first suggested, squabbles between Schmyoo Line and Paramount knocked it on the head and, instead, Jason was pit against a telekinetic teenager in the seventh Friday, The New Blood, to ever-profitable but diminishing box office receipts, while Freddy hit his peak offing the remaining Elm Street kids in the then-ridiculously-successful fourth Elm Street outing, The Dream Master. 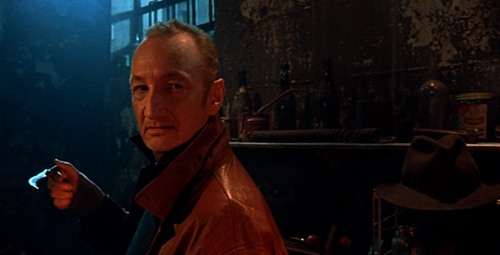 As the decade ended and people got bored of the same-old-same-old, Schmyoo Line purchased the rights to the Jason franchise and everybody supposed this would be the time the two would finally meet. But like a romance doomed to fail, it was still not meant to be, and, instead, Schmyoo Line ended both series in 1991 and 93 respectively, although Jason Goes to Hell was polished off with the coda of a razor-fingered glove dragging the hockey mask into the earth, suggesting anything was still possible.

In the 90s, when Freddy’s sire Wes Craven re-invented the slasher wheel with Scream, the idea was floated again. Although Michael Myers was rejuvenated along self-referential lines in 1998, audiences seemed to be more into earth-bound concepts of regular people going nuts and killing a bunch of folk, as witnessed by the you-upset-me motives across the Scream / I Know What You Did Last Summer / Urban Legend spectrum of loons. No room for dream demons and unkillable mama’s boys.

Once again, the genre petered out thanks to the olde logjam effect, including the ill-conceived and ill-received attempt to put Jason is space for his tenth venture (eighth, if we’re going to be pedantic), which opened in 2002. However, something good clearly had come from all this (if anyone knows what it was, please write me), because in 2003 the fifteen-year-old idea only went into motherfucking production!

How? We squawked, how will Freddy and Jason exist in the same realm? From the gazillions of spec-scripts ranging from a cult that worships Jason to characters like Tommy Jarvis and Alice Johnson returning, the eventual choice was an impressively simple proposition…

Peter Jackson – that Peter Jackson – offered up a script for 1991’s Freddy’s Dead in which the disempowered Krueger wasn’t scary enough to haunt anybody’s dreams and so teens sought him out in their slumber to kick his ass. Part of the concept held up; in FvJ Freddy has indeed been successfully banished by the residents of Springwood thanks to a concoction of Hypnocil-doping the teen population and never mentioning his name, so no fear can spread = no bad dreams = no deaths.

Irked by this resolution, Freddy engineers a plan of his own and, posing as Mrs Voorhees, resurrects the undead Jason, sending him off to Springwood to cause a bit of mayhem that will, he hopes, instil a near fear into the teen populace that will allow him to return and slash anew.

This all goes well until Jason continues killing anybody and everybody, and Freddy realises he needs to be removed from the picture. Caught in the middle of the mess is the usual group of mostly-doomed teens: Doe-eyed Lori, who lives at 1428 Elm Street, her BFF Kia (Rowland, of RnB shriekers Destiny’s Child), Lori’s until-recently institutionalized beau Will, and a few others who matter less, although special mention should go to their drug n’ booze loving friend, Gibb (Isabelle, fresh out of Ginger Snaps).

Freddy manipulates his way into destroying the town’s stockpile of Hypnocil that the kids make a bid for, and tranqs Jason in order to penetrate his dreams. The teens take Jason’s zonked body off to Camp Crystal Lake in the hope of bringing Freddy across to the real world (the same way Nancy did in the original that nobody thought of in any of the sequels) where they will hopefully occupy each other and leave Springwood alone.

The final third of the films descends into WWE anarchy, with the two going at each other for what seems like an eternity of machete slashes, razor stabs, impalings, limb-removal, and even decapitation. It’s liberally bloody, increasingly wearisome, and 100% stupid.

While the film wisely adopts to parody itself before anyone else can, thanks largely to Ronny Yu’s direction after his mini-miracle with Bride of Chucky, it’s dumb even by slasher movie standards: Dialogue is persistently overwrought to explain what we can see occurring on screen as if the audience is going to be too mentally challenged to comprehend for themselves…

Not quite Laurie, Annie, and Lynda, but the FvJ girls are appealing leads

Example: The first teen to encounter Freddy in a dream gets away unscathed and has to utter the lines “I’m alright! I’m OK!” followed by Freddy saying “Not strong enough yet…” Yeah. We kinda realised that. Later, the depleting teen posse look up Hypnocil online to see what it does. The screen we’re shown says ‘Suppress your dreams’ in big letters, yet the character reading from the screen mentions this last, after a load of inconsequential gobbledegook, despite the fact it’s written in huge font in front of everyone!

IQ-assumptions notwithstanding, the film works best before the two face off. Although Freddy only succeeds in slashing one victim for the whole movie, the dream sequences are good, as are the early murders dealt out by Jason, and the Scooby Doo meeting (and van!) the teens use was amusing. There are countless nods to earlier films in both series, with Westin Hills Psych Hospital back after the Dream Warriors, young Jason is seen with a sack put over his head by nasty campers, although Camp Crystal Lake seen as an untouched 50s relic was strange considering all of the films were set from 1979 onwards.

Ultimately entertaining and operating as promised, not to mention phenomenally successful, outperforming all previous installments in both franchises combined. What Freddy vs Jason lacks in subtlety and scares (virtually everything), it makes up for in enthusiasm and loyalty to both sets of earlier films, wherever possible.

Blurbs-of-interest: Robert Englund’s other slasher flicks include Behind the Mask: The Rise of Leslie Vernon, Heartstopper, Hatchet, The Phantom of the Opera, and Urban Legend; Katharine Isabelle was in Bones and See No Evil 2; Jesse Hutch was also in The Tooth Fairy; Ken Kirzinger was a stuntman in Friday the 13th Part VIII: Jason Takes Manhattan, and acted in Wrong Turn 2, and Stan Helsing (as the Jason rip-off, ‘Mason’); Lochlyn Munro was also in The Tooth Fairy, Scary Movie, Hack! (with Kane Hodder) and Initiation; Brendan Fletcher was in Open 24 Hours.