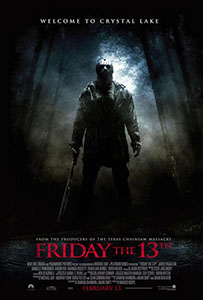 Direlogue: “I have more chance of fucking a penguin than that girl.”

How do you remake a non-classic classic? If something has only gained ‘credibility’ through a kind of kitsch nostalgia, much like my rants about Fame, can upping the budget and trying to play down some of the genre pitfalls actually change the core essence? After all, you can’t polish a turd – but you can roll it in glitter!

As stated numerous times, to me Friday the 13th is anything but a turd. I genuinely consider it to be at the very least competently made. People may laugh, but most people haven’t seen 473 other slasher films to compare it to.

Here, Bay and his Platinum Dunes house of horror remakes (previously destroying The Amityville Horror and The Hitcher) could be seen as a curse as much as a blessing when it comes to Jason Voorhees. Their take on The Texas Chainsaw Massacre impressed me, but then I’ve never liked the original so it wasn’t difficult. But here was a film I loved. Argh. I was shaking throughout the ads and trailers. But at least they didn’t let Todd Farmer near this one.

OK, so remember Jason Goes to Hell? Remember it wasn’t very much loved? Hey, I like the film but we all know there are only a few good scenes: the beginning and the kids who go camping. Friday ’09 is very much like those two scenarios, it’s mega-nostalgic in its photography, characters, setups and the like. This be good, this be! 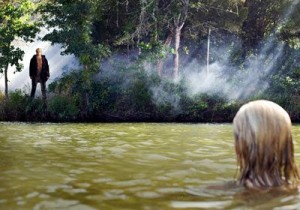 As it goes, the events of the original film don’t re-occur here, it’s not a remake as such. We begin at Camp Crystal Lake in 1980 and the fate of Mrs Voorhees (a perfectly cast but oddly named Nana Visitor) and skip to ‘the present’ where five campers hike into Jason’s wilderness, a couple of whom discover his home while he slaughters their friends, killing all but nice girl Whitney (Righetti) because she resembles Mama Voorhees. Six weeks later, Whitney’s brother Clay (Padalecki) comes to town looking for her, coinciding with seven college kids out to party at the condo of rich snob Trent’s dad.

While the college kids serve as interim victims for Jason, Clay and second nice girl Jenna (Panabaker) discover the remains of Camp Crystal Lake and also that there’s a psycho living there, a psycho who has recently donned a hockey mask he found whilst slashing up a local. The expected massacre ensues and all roads lead to the bro-sis reunion and foiled escapes from Jase. 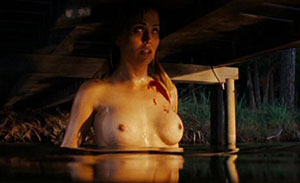 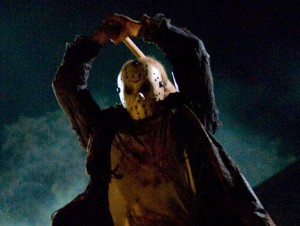 There are a few areas that could have been improved upon, most evidently is the total lack of need for this to be anything but another sequel. This should be called Friday the 13th Part 12, paving the way to the thirteenth 13th. The scribes pull a Halloween H20 on us, re-writing the in-between after the first movie and essentially taking the best bits from 2, 3 and 4 in the hope of kick-starting a revival.

But as far as complaints go, that’s the main issue. Everything else is business as usual (ka-ching!) The paperthin teens are cut to pieces in a variety of surprisingly not-so-inventive ways, there’s more nudity than anything since A New Beginning and the requisite rainstorm eventually enters the equation in the final reel. No shots of the moon though!

As the main characters, Padalecki, Panabaker and Righetti are all effectively able and it’s nice to see Richard Burgi (albeit fleetingly) as ‘The Cop’. Aaron Yoo makes the best impression out of the doomed teens, whilst the other five range from the annoying moaner, via the token black guy to the two hot chicks who disrobe but look, sound and walk exactly the same!

So, we got drug smokin’ kids, a campfire story, rain, assorted weapons, likeable leads and a Jason who runs for the first since since 1984! There’s a fitting body count of 13 (one more if you count Mrs V in the prelude) and hope of a sequel. Thus, I cannot conceal my joy that this project was undertaken and, ahem, executed so well.

Blurbs-of-interest: Jared Padalecki got waxed in, uh, House of Wax and was also in Cry_Wolf; Nick Mennell appeared in My Little Eye and also Rob Zombie’s Halloween remake (as Bob). America Olivo was Britt in Circle and Elijah Wood’s mommy in the 2012 remake of Maniac.