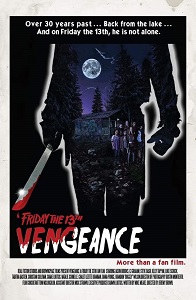 Laughter Lines: “Maybe we should ditch the bikes and cut through the woods?”

I’ve often thought that many of the problems that have beset the Friday the 13th series might be solved if the series just became a straight-to-video show. It’d likely mean these length gaps between entries would be reduced for one thing.

It seems that, tired of waiting, some folks have decided to go it alone. Never Hike Alone and its recent follow up showed how much can be achieved on micro-budgets, and Vengeance – a film actually longer than most of the originals! – landed looking like I’d expect DTV Jason to present: A little more rustic around the edges, with the requisite cheap horror trope of added lesbianism, and a redonkulously high body count.

Weaving a tale between the available elements, this really is a love letter chiefly to 1986’s Jason Lives, picking up in 2018 and running with the excised idea of Jason’s daddy Elias Voorhees making his long awaited debut. This point confused me somewhat – as he’d surely be around 90, but then there’s something about multiple death certificates too, so is he a ghost?? Either way, Jason resurrects from the bottom of Crystal Lake and wastes no time in squishing, impaling, hacking, and tearing limb from limb everyone he encounters. The local sheriff (the late Steve Dash, from Part 2) is keen to chalk things up to bear attacks.

Not too far away, Tommy Jarvis’ daughters Angie and Ashley are worried about their missing pa. Angie’s Jason-obsessed friend Rob agrees to help her search for him, rounding up relatives of other survivors: nieces and nephews of Ginny, Chris, and The Final Chapter‘s Rob. They’re sold on stopping Jason so head off into the wilderness where they cross paths with a Crystal Lake tour group.

Jason, meanwhile, has hacked his way through another tour group, and a chain gang of inmates clearing the forest, while Elias (CJ Graham) is busy hunting down the very counsellors responsible for his son’s 1957 drowning, who we get to see in a cute flashback where people say ‘fuck’ a lot more than they probably would have done back then.

Vengeance is pure love for the lore around the movies, from the font used in the credits, to the score BY HARRY MANFREDINI!!! and some truly head-tilting ideas for denouements courtesy of the J-man. My only real complaint is that it’s a very ‘busy’ film, with multiple parties in play at any one time, sending the coroner’s backlog stratospheric and a sense of futility for a couple of seemingly important characters who are summarily killed before they achieve anything, making their presence seem superfluous. It’s neither here nor there though, the people behind this have laid their adoration out for all to see and it’s something really worth the time of any Crystal Lake fan. 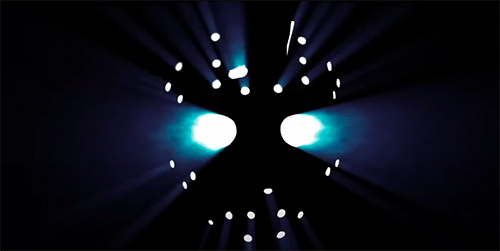