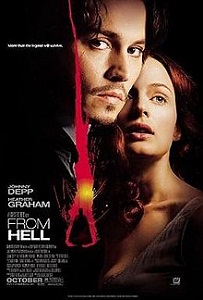 “Only the legend will survive.”

If there is any sort of afterlife where the dead can observe the goings-on on Earth, I imagine whoever Jack the Ripper was, he’s chuckling at the sheer number of books, films, and documentaries about him. This time, the tale is grafted into a bleak slasher-cum-mystery box office hit, courtesy of twin-bro directors Albert and Allen Hughes, from the novel by Moore and Campbell.

Johnny Depp – along way from his humble Elm Street victim beginnings – is Abberline, an East End inspector with psychic abilities, who is assigned to find out who killed a local prostitute. True to the events of 1888, the murders continue and Abberline is drawn into the potentially dangerous possibility that the killer is part of a larger conspiracy that could harm the face of the Monarchy.

With a little help from final victim-to-be Mary Kelly (Graham) and the Queen’s ageing surgeon, Abberline begins piecing together the puzzle against the wishes of his pompous superiors, who frown at the theory that a ‘well-bred’ individual might be responsible. Meanwhile, gruesome slayings continue and the reality of the brutal dissections is rammed home – a ferocious throat-slashing sticks out – and the final notoriously stomach-churning act of evil is mercifully hardly shown. 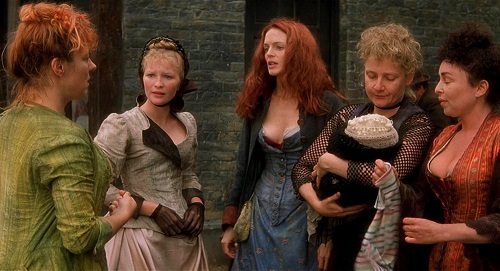 The outcome is satisfying in terms of the world the film operates in, considering it’s unlikely the identity of the real Ripper will ever be 100% certain. The downbeat conclusion suits the grimy backdrop of Whitechapel and the observations of class differences in the era, but the almost I Know What You Did Last Summer-ness of the secret that the victims share requires some stretching of the imagination, that makes this “not just a slasher movie” movie feel more like a slasher movie.

Written out like this, the plot sounds quite stupid, but high-brow big screen slasher films, no matter how opaque they attempt to be, makes From Hell one of the more interesting variables on the genre conventions. Do not confuse with other JTR-pillaging slasher of 2001 Ripper: Letter from Hell.

Blurbs-of-interest: Depp appeared in another period-set slash-a-like Sleepy Hollow; Heather Graham played Casey in Stab in Scream 2; Jason Flemyng was in Seed of Chucky; Terence Harvey was in the 1989 slasher take on The Phantom of the Opera.