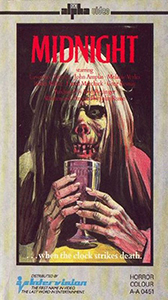 “…When the clock strikes death.”

Direlogue: “I hope you listen to what you told them and don’t go camping around here.”

Night of the Living Dead co-author Russo directs from his own novel of the same name this trite, misogynistic Texas Chain Saw photocopy in which a backwoods mama teaches her four children (three boys, one girl) that people are demons and must be sacrificed to Satan.

Into this redneck nightmare runs Nancy, a God-fearing Jamie Lee wannabe on the run from her abusive stepdad (Tierney). She hitches a ride with a couple of frat boys on their way to Fort Lauderdale. After giving a lift to a jive talking Reverend and his daughter – who prattle on about unsolved murders in the locale before they both meet nasty ends – the three teens make the mistake of camping out.

Both boys are shot dead by two of the psycho siblings, disguised as cops, and Nancy is taken prisoner to put on the conveyor belt to sacrifice at midnight along with two other young girls.

Russo makes the most of the bleak settings and the redneck style works well, but the narrative is driven by overlong, hammy expositions rather than action. There’s also little insight into the psychosis of the killer family other than the corpse of the mother held at blame, sis taking control, and why their sacrifices are exclusively teenage girls.

Add to this a horrible Euro-country theme song that crops up at every available opportunity and one might understand why the family were driven mad after all.

Blurbs-of-interest: John Russo co-produced The Majorettes and directed a seldom-seen sequel to Midnight in 1993.

tagged with get your own ideas!, gore o'clock, slasher, the 80s, what the hell!?, who finances this crap!?