Being attacked in a car once again, here we find Nancy Stephens – Nurse Marion from the original Halloween (plus II, H20 and Kills) – as a mother out to pick up her son from school in 1979’s TV movie Death Car on the Freeway, when she honks at THE WRONG MOTORIST, a loon known as the Freeway Fiddler, who loves nothing more than ramming young female drivers off of LA’s highways, while playing hideous bluegrass fiddle music from an external speaker. 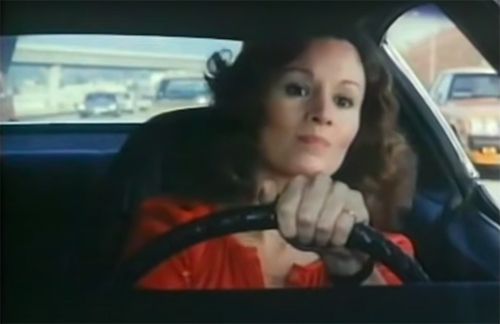 The unseen fiend slams on the brakes when she tries to get by, and she gets caught up on his tow bar and then dragged down the freeway, while the cops give chase. It’s not clear if she survives the accident, but I hope she lived to collect her son.