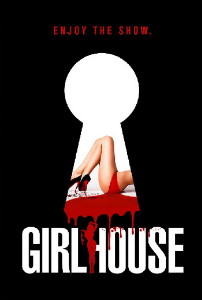 Laughter Lines: “I’ve thought this through completely. I really don’t see how anything bad can happen.”

Sexy girls in a house decked out with cameras so guys can log on and crack one out. No! Don’t go! I know it sounds like two dozen other camcorder exploitation flicks with nothing to offer, but GirlHouse is, hugely to my surprise, a pretty solid slasher flick with some of the best production attributes this side of the millennium.

In 1988, two girls tease a tubby preteen and trick him into a one-sided game of show and tell, which ends with them laughing in his face about the size of his cock and sending him running away. A little later, the ringleader is ambushed as she cycles home down a back road and no amount of sorrys can save her from being thrown off the side of a bridge.

Just this five minute opener packs a punch absent in 90% of contemporary slasher films, evident from the effort going into building an atmosphere. Like the films of yore, the shots fragment all around the victim and we know something bad is going to leap out any second, just not from where… This simple approach, used all the time in the 80s, makes a lot of difference. 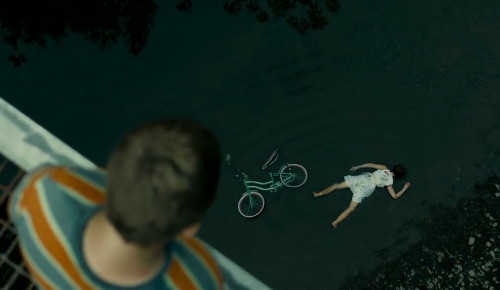 One repeat customer is Loverboy, our grown up psychotic, who worships all the girls and is technically able enough to hack through the firewalls to send a photo of himself to Kylie. Her heart, however, is slowly being won over by old schoolmate Ben, who stumbles upon her online and is prompted by his Ed Sheeran-esque roommate to drive to her college and strike up a conversation.

After a girl evicted for her drug habit is permitted to stay in the house again, she finds Loverboy’s photo – not the most flattering – prints it, and sticks it up on a wall, where he eventually spies it in the background and, humiliated, loses his shit and stomps in the direction of GirlHouse.

Before long, most the tech and security guys have been murdered (largely off-camera and always fully clothed) and Loverboy seizes control of the house functions, stalking the girls one by one while helpless patrons watch, including Ben and his roomie, who embark on Halloween: Resurrection-esque attempts to help remotely.

One girl has her fingers axed off, making it impossible for her to type in the address of the house to summon help; another is choked on a dildo; one locked in the sauna with the thermostat cranked up… What sets GirlHouse apart from the dreck that share its premise (Voyeur.com comes to mind), is the will of (most of) the girls not to just sit there naked and die: The sauna girl manages to bust out and runs straight for the pool; another thought dead waits for the killer to happen by and strikes out at him; and Kylie, when inevitably the last one alive, pulls all the feeds and lures the killer to the basement where she uses nightvision to fight back and then beats the crap out of him with a camera. 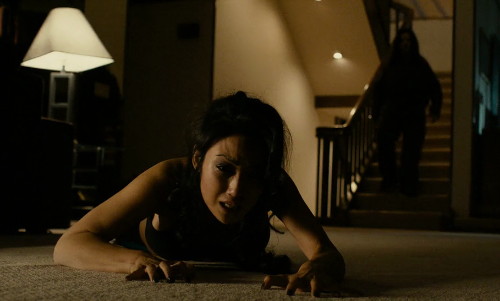 If there’s a comment on the relationship between pornography and objectification, it’s either too vague or forgotten in a tide of blood. A quote from Ted Bundy kicks things off, though it later falls back on on cliches of sad, fat, drooling loners who hate women. That said, the menfolk prove to be the most dispensable, often blindsided and incapable when confronted with the killer. Or do the unwritten rules of voyeurism apply and the perception is that the audience don’t want to see the murders of men on screen and that it’s the girls who are to blame? Would Guyhouse work? It’s one of the oldest dilemmas to plague the genre. But the genders are equally represented when it comes to dead bodies by the end, and it’s Kylie who does all the hard work when push comes to stab.

Even if elements of the story have to cave to genre tropes to work, GirlHouse succeeds through production attributes alone, something most horror producers don’t even seem to consider, largely under the illusion that T&A and corn syrup splashed on a wall tick enough of the boxes.

Overlook the skeezier elements and there’s a solid gem lurking beneath.