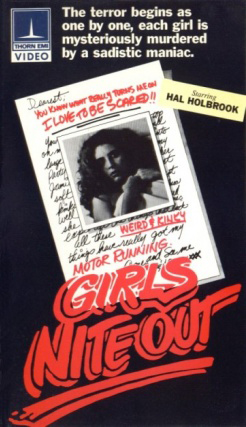 “The next time you go to a fancy dress party… Check who’s going with you.”

Dire-logue: “My daughter was about your age. Then she met a guy like you. Now she’s dead.”

Every American college campus was apparently once the scene of an awful murder XX years before. Some believe it to be an urban legend (like the one at Pendleton University in, uh, Urban Legend), while others believe that it really, like, TOTALLY happened!

In Girls Nite Out, shot in ’82 as The Scaremaker, shelved for two years and then picked up and rebranded with an emphasis on the film’s more misogynistic undertones, the grisly murder that occurred on Dewitt University campus happened to security guard Hal Holbrook’s daughter.

The institutionalised loon responsible, Dickie Cavanaugh, hangs himself at the beginning of the movie and the two schmucks charged with burying him are smacked to death with a shovel by a shady assailant.

Action shifts to hi-jinks on campus. And by action, I mean a basketball game, lots of talking between the interchangeable teen characters, made up of the guys on the team and their respective girlfriends. There’s a lot of cheating going on. Lynn (Montgomery) is dating Teddy, but he’s actually sleeping with Dawn, who’s supposed to be going out with Bud. Sheila wants to ditch Pryor (David Holbrook, Hal’s junior) and hook up with Benson, the team mascot who prances round in a bear costume.

All of these revelations are quite boring. Get to the killing already. 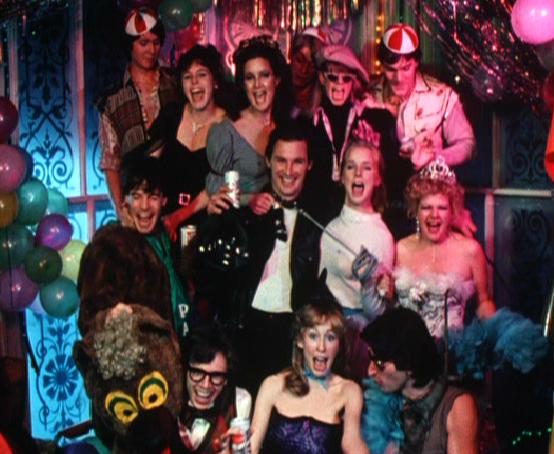 The cast may be big, but only 3 in this photo get bear-clawed

There’s to be a cheerleader scavenger hunt after the post-game party, with clues being blurted out over the college  radio station. The kids flit about, flirting, talking about their emotions n’ stuff. Hal Holbrook crops up a few times. The perky waitress in the cafeteria comforts all those who are sad about their lives blah blah blah.

All of this is boring too. C’mon… more killing needed.

The party happens. Pryor makes a big scene when he sees Sheila and Benson necking, calls all girls whores and says he won’t forget it. Benson is then killed (yay!!!) but it’s dull and almost bloodless. The hissing killer snatches the bear costume and renders a claw out of some knives taped together around a handle. It’s the proto-Krueger!

See how easy it is to make:

The killer bear mascot finally starts slashing cheerleaders, tackling them and grunting “bitch! slut! whore!” while they shriek and hemorrhage red paint. These scenes are efficiently creepy in slasher movie terms but it’s difficult to take a loon in a teddybear costume seriously, especially as he growls his misogynistic insults to his dying nubile girlies.

In a strange twist for a slasher flick, the murders are discovered and Girls Nite Out crowbars in a little cops-interview-suspects scene where all the basketball boys say “you don’t think I have anything to do with this, do you?” Then, almost as an afterthought, Dawn re-enters the film and finds herself captured by the killer; Teddy goes to her rescue while Lynn calls for help. Hal Holbrook shows up and confronts the killer, who is nobody we really suspected and the film’s only decent revelation. 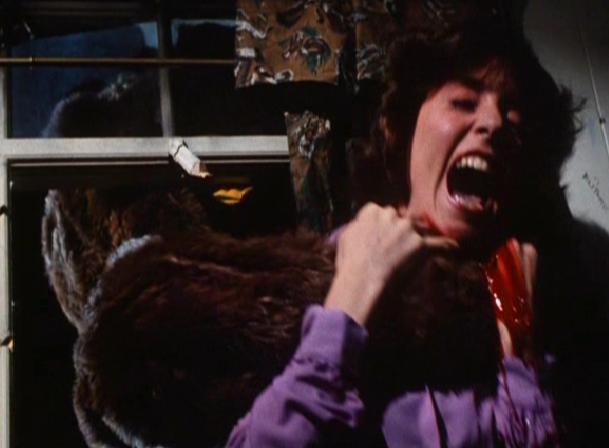 Girls Nite Out is a slow, muddled flick with no real conscious direction to it. The slashing part is well done and the bear is, if nothing else, different. But with so much time spent on the dull lives of the students, there’s next to no payoff for most of them. Julie Montgomery, despite getting top billing, is not a final girl. She may not die, but she’s never in any danger either. The basketball team is comprised of a bunch of assholes, most of whom should die but don’t.

Holbrook reportedly only shot for one day, uttering reactive lines to the camera and not featuring in scenes with any other cast members, which explains his entire lack of interest when the killer confesses to murdering his daughter rather than the deceased Dickie Cavanaugh.

The final shot has a creepy sub-Sleepaway Camp vibe to it, negated by the fact that the film just stops abruptly with several issues unresolved. It’s understandable why the movie was shelved for two years; it tries hard and looks good but fizzles out in a confusion of genre priorities. 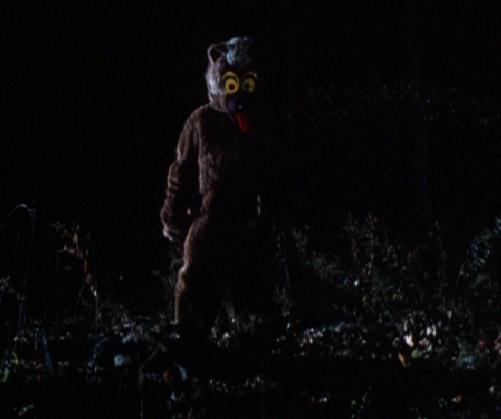 I wanted to like Girls Nite Out more than when I last saw it twelve (!) years ago. And I did, but only half-a-star more. There’s only so much Yummy, Yummy, Yummy I’ve Got Love in My Tummy I can take.

Blurbs-of-interest: Rutanya Alda was also in When a Stranger Calls (1979) and You Better Watch Out as well as Amityville II and The Dark Half; Lauren-Marie Taylor was Vickie in Friday the 13th Part 2; Carrick Glenn was Sally in The Burning.