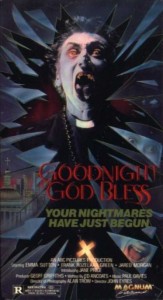 “Your nightmare has arrived…”

Dire-logue: “When they put teeth in your mouth they ruined a perfectly good asshole.”

Britain in the 80s: new romantics, Thatcher, miners strikes, fluffy perms and shit-feeble attempts to recreate the American slasher film – regardless of the evident talent strike also in force…

Things begin brutally: a priest – face off camera – strolls along past a school playground toying with his Rosary beads while kids toss a ball around beyond. Priest enters, stabs a teacher and then shoots a bunch of kids. Little kids. Like six or seven years old. Like the Mini-Pops. Harsh.

Five kids die and there’s only one eyewitness in Mandy, the little girl who saw the whole thing happen and only survived because the gun ran out of ammo. It’s now up to gorky American detective Green to put a stop to the madness and fall in love with Mandy’s mum (Sutton) along the way.

The killer priest, meanwhile, offs a random nightclubber and a poor dog before returning to get Mandy, seeing nowt wrong in stabbing the clueless coppers who stand in between.

Director Eyres later went on to make Ripper: Letter from Hell, which is about as far removed from this piece of festering turd as you can get. It’s horribly put together, with scenes so padded and inconsequential that the dialogue is often muted in favour of coma-flirting elevator muzak. The romantic sub-plot is lousy: detective dude ‘fesses his love for Mrs Mandy after two dates, to which we are cordially dragged along kicking and screaming. And the police ‘investigation’ looks like The Bill made several casting redundancies.

After battling through enough tedium to put a can of Red Bull to sleep, the killer is cornered and shot out of a window, the sting in the tail being that we get to see his face, which is pretty pointless as it’s already on the cover of the video box.

Do we ever find out who he is? No.

Why did he shoot up the school? Don’t know.

Well, what can you tell me? I miss Caramac.

There’s piss-all resolution and time that could’ve been used setting up potential suspects was instead wasted on the long date sequences, overdubbed by a jaw-droppingly atrocious ballad sung by Eyres himself!

Eject it and say Goodbye, Fuck Off Forever.

tagged with accents from hell, get your own ideas!, hair don'ts, I want to die, Rule Brittania!, slasher, the 80s, what the hell!?, who finances this crap!?