“In my day children didn’t suspect their grandparents of being serial killers!” 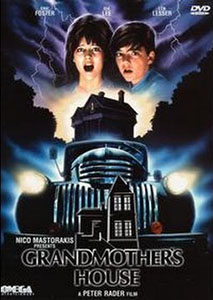 “She’ll spoil you to death.”

Laughter Lines: “If I had a sister like that, I’d boff her.”

After their single father dies, teen siblings Lynn and David are shipped off to live with their grandparents on their Florida farm, where things aren’t quite what they seem…

David is quick to suspect Grandma and Grandpa are murdering people. A dead guy is pulled out of the lake. Brinke Stevens keeps appearing in the background, staring lots. What the fuck is going on?

This weird, sluggish production from 80s exploitation rockstar producer Nico Mastorakis has glimpses of creativity and some mild chills, but never really goes far enough with its concept. The mid-point twist is telegraphed with way too much clarity, as in “oh, I know what’s about to happen!” but it segues into a decent long chase. Although they do that stupid film thing of running from a truck in a straight line. In an orchard. With fuckloads of trees.

Elsewhere, opportunities to kill extra characters are missed. Lynn in harassed by a guy at the swimming pool, who I took to be retarded, who manhandles her into a kiss and pervs constantly. Later, however, she’s on some weird driving lesson-cum-date with him. He doesn’t die. Annoying teens come over for a gathering, they also don’t die, but one of them is Angela O’Neill, final girl from Sorority House Massacre. Ooh. 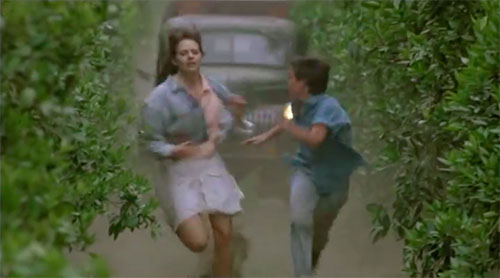 A contrived thing with a firework rocket thingy is strange, and the ultimate climax before the film just sorta stops dead. Points for electing a boy as the curious investigator for a change, but this film rattles on like one of your grandma’s stories about a time before you were born…