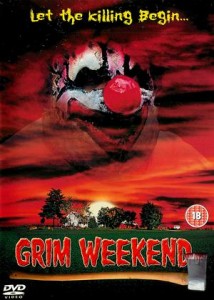 Laughter Lines: “I guess I’m not used to being trapped in a secluded house with a fucking psychopath!”

Grim is a fitting moniker for this staggeringly bad made for TV slasher, which pits four city yuppies and a nubile hitchhiker (who looks like Rebecca Gayheart) against a clown-masked axeman stalking the woods by the country residence one of them owns.

It’s hard to believe that films this bad are still made, let alone unleashed on the shelves of video stores. The dialogue consists mainly of ‘shut the fuck up, bitch’, repeated arguments over who might be behind it, as well as name-checking Scream and Friday the 13th during the same-old-same-old campfire story.

The film long outstays its welcome and grinds ever closer to the 100 minute mark before the repugnant conclusion and an equally cruddy ‘twist’ that sets things up for a sequel – if anybody is stupid enough to write to the producers praising them on a job well done. Abysmal in every way a film could be.

tagged with get your own ideas!, I want to die, slasher, who finances this crap!?