I’m celebrating Halloween a couple of days early. Why, you snap? Well, a day off work and the absence of VeVo’s love-toy (who can’t be doing with all the grue) means today is the best possible window for some much needed viewing of my growing stack o’ horror flicks…

So, it’s just after 10am – teeth clean, showered, dog walked – let’s slide in the first flick… 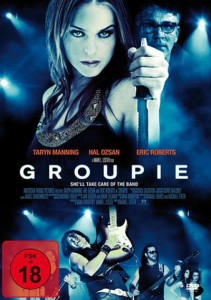 “She’ll take care of the band.”

Dire-logue: “Did I pull my face out of a cow’s arse or something?”

Horror movies about rock bands were numerous in the 1980s – devil worship through their satanic music n’ all that stuff or the members of a hair metal group and their entourage being stalked and slain by some maniac. Groupie is the first in some time to go down this path, save for, perhaps Slash (where the band went to a farm for some reason) or The Choke (where I can’t remember why they were being killed).

Rockers The Dark Knights are rumoured to carry a curse after one of their shows results in a pyrotechnic accident that, in turn, causes a stampede and a reveller is killed. 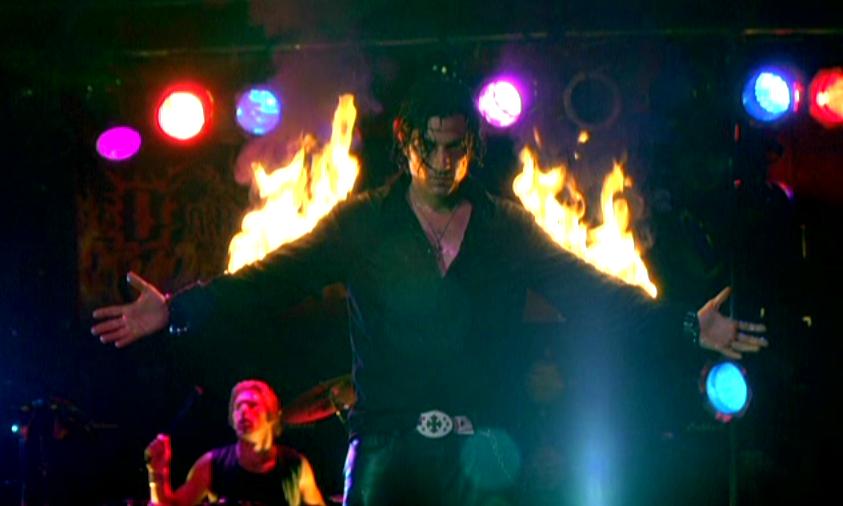 The band’s comeback tour is now under pressure to deliver both an album and some satisfied patrons, the latter proving a problem as introspective lead singer Travis is dead against repeating the fire trick that caused the death before. Things seem to be going otherwise okay – there’s ample Coke and shitloads of girls willing to flash their tits – until new groupie Riley turns up and people start to die.

A publicist disappears and a rival groupie (Betsy Rue) for Travis’s affections is soon found face down in a hotel swimming pool. The tour manager (Roberts) wants all groupies out of the picture but Travis buys into Riley’s talent for creating molds of faces and creating masks – perfect for the cover of the CD.

Thus, Groupie begins to show more in common with the 90s mental-woman movement which churned out The Hand That Rocks the Cradle,  Single White Female et al, settling in the end as the perfect partner for something like Devil in the Flesh, as Riley will, it seems, do just about anything to get rid of anyone standing between her and Travis – including the rest of the band.

Turns out, of course, that the dead concert teen was her lil bro and now she wants vengeance – so death comes by knife, pre-planned electrocution and the plaster cast mush that Riley uses the make the molds, seducing the band members into letting her tie them up and apply it. 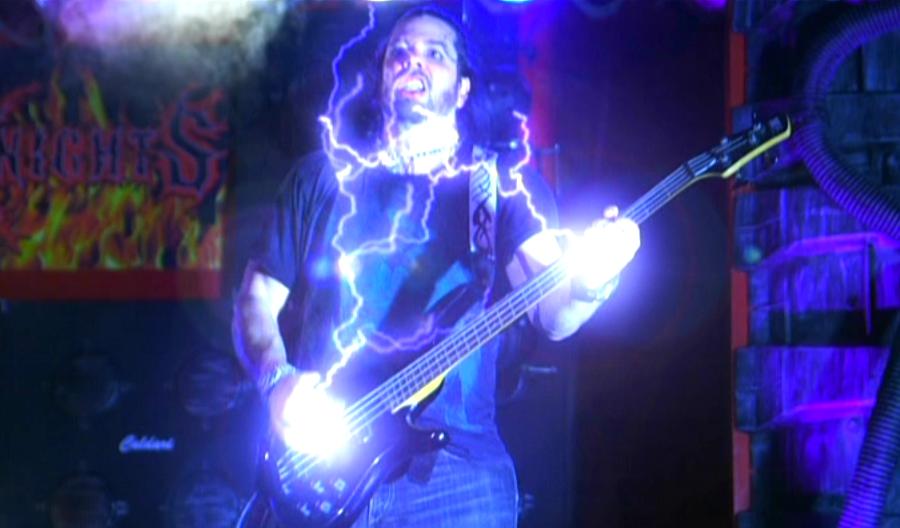 As is so common in this era, things start better than they end. Acting and production are neatly above average and the scenario is, for the moment, believable. Once Riley is revealed as looney toon things go all Fatal Attraction for the exegesis to the anti-climactic but at least un-twisted ending. It’s worth a once over but, like most groupies, will probably be forgotten about in the morning.

Blurbs-of-interest: Betsy Rue was in both My Bloody Valentine 3D and (Rob Zombie’s) Halloween II. Director Lester was executive producer on Tobe Hooper’s The Funhouse and also produced Devil’s Prey and The Wisher.

tagged with Halloween, Nu-di-ty, obvious identity of killer, slasher, slasher films that aren't supposed to be funny but are funny