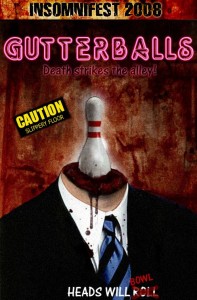 Dire-logue: “Those balls are shitty and used…just like your underwear.”

Sometimes a product seems to garner a word of mouth that doesn’t ring true. Such was the case of Gutterballs last year; such a great, nostalgic slasher flick yadda yadda yadda… My spider senses told me otherwise and, quite smugly, I was proven right when I watched it earlier today. Talk about nauseating…

Within a few minutes, we’re subjected to an extreme close up of a mini-skirt, no-pants-wearing girl’s undercarriage. Graphically. This is accompanied by two groups of people, a quartet of guys who hate the other pack, some girls, a pre-snip transvestite and three other guys (I wasn’t sure who they were), shouting obscenities at each other and no more. Barely a sentence of the following 95 minutes goes by without the word ‘fuck’ in it. I swear like a brickie but have an extensive enough vocab to get through most social situations without having to, something these folks are incapable of.

A fight breaks out that leads to the gang-rape of no-pants, who eventually has a skittle shoved up shown crack. Naturally, she is upset about this and when the entire cast return to the Xcalibur Lanes the next night, they’re locked in and picked off one by one by a psycho with a bag over his head, who favours using sharpened skittles and bowling balls to kill. There’s a grim member-slicing moment for the tranny and a head shoved in a ball polisher before numbers are whittled down to the last couple for the obligatory unmasking and exposition blah, by which time I was both bored and tired.

Gutterballs does try in some areas, there’s a funky sub-disco soundtrack and little reliance of modern technology to aid the victims but it’s all crushed beneath a script so horribly dismal that the actors are given absolutely no range to work with, they’re just antagonistic assholes who can’t utter a profanity-free sentence. It’s odd to see so much male nudity, albeit some prosthetic but the film is just a train wreck of juvenile cliches seemingly designed to make morons laugh at the excesses of gore and skin on parade, glued together with crap dialogue but hearing “the C word” every fifth sentence, wanton homophobia and a plot my three-year-old nephew could’ve written doesn’t do it for me. Spend your rental money on a couple of games at the bowl-o-plex.

tagged with Canuck, gore o'clock, Nu-di-ty, slasher, what the hell!?, who finances this crap!?