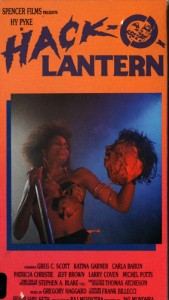 Laughter Lines: “Ever since my dad died on Halloween night, this day seems to really affect [my Mom].”

I diagnose this one with G.E.S. – Genre Embarrassment Syndrome. The production team appear to have done their best to eclipse their assembly-line slashfest with a cheesy Satanic foreground.

Though filmed in The Year That Fashion Forgot (1987), it appears events are set in 1981, thirteen years after local fellow Bill Drindle was murdered by a local group of devil worshippers headed up by the victim’s father-in-law, who is obsessed with grandson, Tommy.

Skipping back to ‘the present’, young Tommy is now a troubled, Satan-worshipping twentysomething. His younger siblings, a deputy and teen party girl respectively, and dear old Mom, a fretful figure who worries the remains of her family are disintegrating, are concerned for him.

As in My Bloody Valentine, the town’s youth folk are readying themselves for a large Halloween party, while gravelly-voiced Grandpa wangs on about ‘Tommy’s Big Night’.

This all equates to a (slowly) rising body count as teenagers affiliated to the Drindle family begin falling victim to cloak-clad loon who wields a giant hooked fork: One guy gets a good spade in the skull, but the other slayings are textbook standard with little in the way of innovation.

Come the dance hall finale, the killer’s identity is blazingly obvious, along with their motive. We’ve all seen enough of these to know the Devil sect is just a ruse and it will have nothing to do with anything, surprising nobody, cast included!

There’s some really strange filler on parade here, with a music video nightmare that goes on forever and a very odd stand-up comedy routine crowbarred in halfway through: The jokes suck and the comedian doesn’t get a rake to the face as hoped.

Little to recommend beyond the awesome title and good outfit for the maniac. Stick with the definitive Halloween slasher.

tagged with I want to die, obvious identity of killer, slasher, the 80s, who finances this crap!?