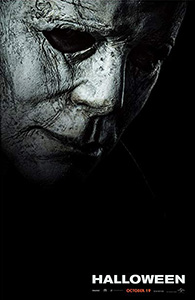 Laughter Lines: “What are we gonna do – cancel Halloween?”

H40 has a double meaning here, as I was born in 1978, so Halloween and I turned 40 together in 2018. #Hud40. Schming! Now what of this film we’ve been wetting our pants over for the best part of a year? You best believe I took an afternoon off work to go see it, with one city cinema shut down all week, I couldn’t take the chance it’d be sold out. Beware a few minor spoilers.

The third timeline in the franchise – fourth if you count Rob Zombie’s remakes – is like the reverse side of H20‘s coin, fast forwarded another twenty years, just to make you feel extra old. In this ‘What if…’ of events, Halloween‘s II through Resurrection never happened (‘yay!’ chorused the fans) and Halloween is just the first sequel to Halloween. And also titled Halloween. HALP.

Forty loooong years after the Haddonfield murders of ’78 (just the four vics of the first movie, mind), British documenting duo Aaron and Dana visit Smith’s Grove to try and wring some words out of Michael Myers, incarcerated there since that night but shortly to be moved to a less cushty asylum. The day before Halloween. What could go wrong? 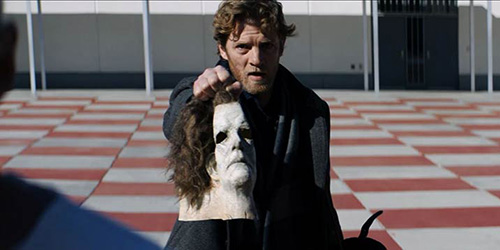 Failing to elicit any kind of response from Myers, they visit Laurie Strode, now a paranoid prepper living outside of Haddonfield and surrounded by target practice mannequins in a house full of improvised traps, hidey-holes, and everything else out of the Maniac Survival section in B&Q. Laurie takes their questions but finds their need to make sense out of the crimes pointless and asks them to leave, while she visits her largely-estranged daughter Karen (the always adorable Greer), and granddaughter Allyson – the only one with whom she has any kind of decent relationship.

The prison transfer bus is found crashed, the staff dead, and the loons wandering, all except one, who kills a father and young son (the latter bravely on camera) to hawk their car and head guess where? Michael’s doc (“the new Loomis,” Laurie later hisses) has survived the accident and soon accompanies the cops back to Haddonfield to find him.

It’s too late for some though, as Michael finds himself back on the streets he used to haunt, and in one particularly awesome single tracking shot, coasts through two houses with a hammer and a knife, doing away with those who happen to be home. Next he moves on to the house where Allyson’s friend Vicky is babysitting, in a scene that’s designed to hark back to the straightforwardness of the original. Laurie, meanwhile, is using her police scanner to hunt Michael down her way. 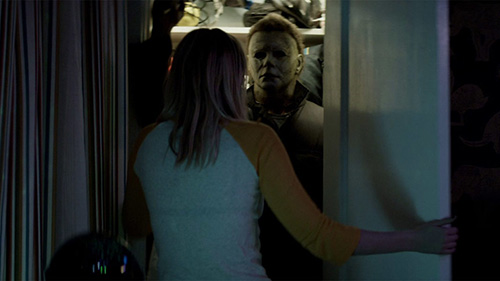 Once the word is out that Michael is back, Laurie, Karen and Karen’s rather naive husband Ray, are moved to Laurie’s house under police protection, while the cops search for Allyson, who was last seen at a dance but is not answering any calls (her scuzzy boyfriend threw her phone into the punch) and is soon being accosted by Michael.

A couple of out-of-the-blue, but not entirely contrived twists later, it’s the Strode women versus Michael in Laurie’s Home Alone funhouse of tricks (but not treats) as she goes into Final Girl mode once again to finish her life’s work and end Michael once and for all.

How does it stack up? I beamed when the titles came up in that font – same color n’ all – as a jack-o-lantern un-moulded on the left side of the screen. The many nods to the original (and even bits of the sequels) brought a smile and Curtis owns the movie entirely in this alternate version of Laurie. She said in many interviews the film is as much about trauma as a masked loon, and she’s right – Laurie 2.0 (3.0? 4.0?) is a screwed up basket case by her own admission, but obviously vindicated in the end. Greer holds her own though, as the daughter who’s been through too much of this shit to care, but when the chips are down, well… There’s a particular moment that garnered applause from the audience. 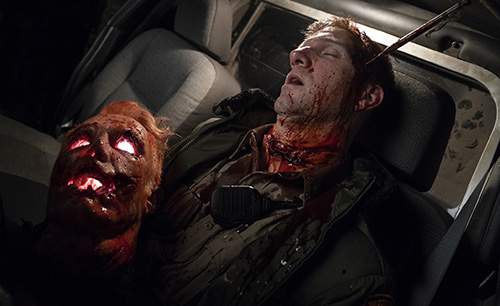 In the role Laurie-for-the-2010s is Allyson, who is great, but doesn’t quite earn her final girl stripes as much as Grandma: She doesn’t even know some of her friends are dead, robbing her of some crucial motivation and, although she certainly gets fed through the grinder, the chance to relive the house-of-horrors bodies-falling-out-of-everywhere scenes on Allyson were curiously missed.

Too few of the doomed characters are given that much to do to stencil their names into our minds like Annie and Lynda: Allyson’s friends, Vicky and Dave, only share a couple of short scenes before they’re gone so don’t get to leave much of a mark. The good kid/bad kid divide is a little too harshly drawn and there wasn’t much empathy for their plights as they paid the ultimate price for being young and carefree.

And… where was the Myers house??? It should’ve put in an appearance. 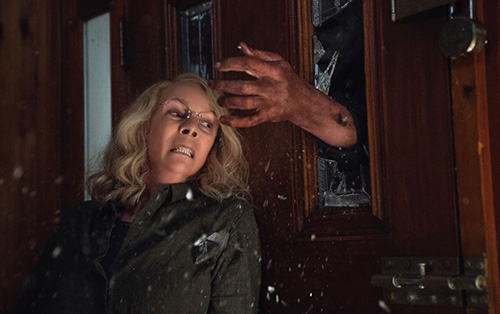 Fortunately, some great scenes (the motion detector light and Hell Night-esque gate moment) towards the end picked up my mood and the final twenty or so minutes were relentless in setting up tension. Reversing the sequels out of my head to appreciate Michael as a more Regular Joe-with-a-blade took some doing, but Laurie is present as a visual cue that we’re in a parallel universe here. The final shot of the three victorious Strode women is glorious, confirming they rule this series, as any and all men fall away helplessly. A feminist context? Pfft, nah – slasher movies have always needed kick-ass women and this just affirms that it’s not all about nude shower scenes and babes-in-peril. In this realm, oestrogen is the elixir of survival.