Home is where the horror is 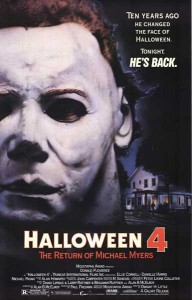 HALLOWEEN 4: THE RETURN OF MICHAEL MYERS

“Ten years ago HE changed the face of Halloween. Tonight, HE’S BACK.”

Dire-logue: “Jesus ain’t got nothin’ to do with this place!”

If you deduct Halloween III from the equation, Michael Myers’ franchise plays quite beautifully through parts one to six before Dimension pretended half of it had never happened and then the remakes took over. Despite all this meddling, Halloween 4 remains the best film of the series after the original.

Nicely occurring on the tenth anniversary of Michael’s kill-a-thon through Haddonfield, both he and Dr Loomis (again played by Pleasence as a part of his presumed pension plan) survived the explosion at the end of Halloween II and there’s some garb about Myers being a federal patient so his comatose body is carted off somewhere else. 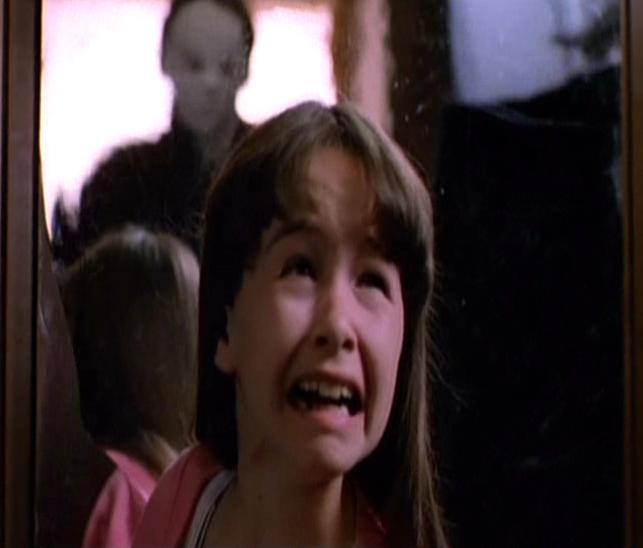 Of course, Michael’s sense of Halloweeny-ness kicks into play and he wakes up, offing the paramedic crew and going on the run. This begs the question – does Michael just ‘deactivate’ on November 1st each year for 364 days? Dr Loomis, ever with the Evil on Two Legs similes, totters off in the direction of Haddonfield to stop the inevitable, whilst everyone else says he’s deranged.

In Haddonfield, Laurie’s orphaned daughter Jamie (Danielle Harris), lives with the Carruthers, her adopted family, and suffers the nasty torment of cruel classmates who like nothing more than to remind her she’s A). an orphan and B). niece of The Boogeyman, despite none of them being old enough to remember “ten years ago.” 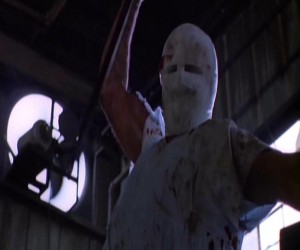 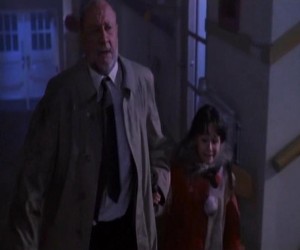 Meanwhile, Loomis crashes into the cop shop shrieking that Michael is coming back after encountering him at a rundown gas station on route. The police don’t take any chances and begin to search for Jamie, hoping to get to her before her uncle does.

In spite of appearing as a reaction to the success of the Friday the 13th and Nightmare on Elm Street franchises, Halloween 4 is a remarkably restrained, almost mature affair. Bloodletting is minimal in favour of creating a similar tension to the ’78 original, with many of the 16 plus kills occurring off screen.

While that can never be recreated, Halloween 4 succeeds in coughing up some excellent scenarios, most notably the rooftop chase, where Rachel and Jamie escape from Michael for the 43rd time by climbing on to the roof of a two storey townhouse. It’s a simple yet effective scene, keying on the dangers of scrambling away from a psychotic maniac and not falling to their deaths simultaneously. 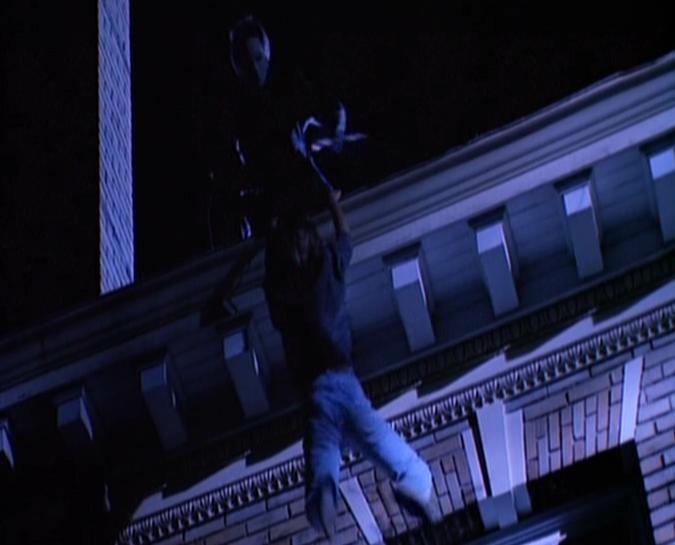 Tossing in a group of gun-toting rednecks anxious to avoid a repeat of “ten years ago” (the number of times they say this evades me, but it’s fair to say the residents go on about it a fair bit, as you would), Michael has apparently achieved the ability of teleportation in his decade off, appearing right where he needs to be at the right time, from the power station to cause a town-wide blackout to the underside of the very truck Jamie and Rachel escape in.

So it’s stupid at times, but what slasher franchise isn’t? Halloween 4 is still better than most just in terms of its production and reluctance to resort to cheap thrills to resurrect the series. Its shock ending grinds uncomfortably with how the next film begins, concerning the link between uncle and niece and they never really state why Michael is so hellbent on killing his entire family… What’s that about?

A solid production, arguably the thinking man’s alternative to the really cheap end of the market, recapturing as best possible the spirit of the flawless original. It’s just a shame that they got greedy as the series went on, because a few more sequels like this would’ve been awesome. 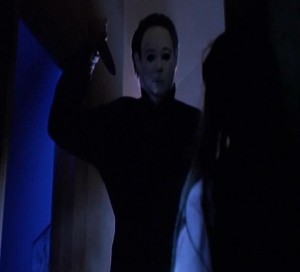 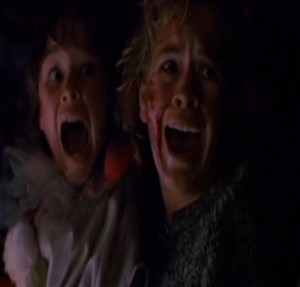 Blurbs-of-interest: Pleasence, Cornell, Harris and Starr all returned for Halloween 5; George P. Wilbur returned to play Michael again in Halloween 6; Danielle Harris was also Annie in the 2007 remake and it’s 2009 sequel and featured in Urban Legend, Blood Night, ChromeSkull: Laid to Rest 2, and Hatchet II; Kathleen Kinmont was in Rush Week; Michael Pataki was in Graduation Day and Sweet Sixteen; Pleasence was also in Alone in the Dark and Phenomena; the wacky priest who gives Loomis a ride (Carmen Filpi) was also in 10 to Midnight; the female nurse at the start was one of the doomed toy store employees in Silent Night Deadly Night. Dwight H. Little directed Robert Englund and Jill Schoelen in the slashy version of The Phantom of the Opera in 1989; writer McElroy also wrote Wrong Turn and its 2021 reboot.