The End of an Era. Again. 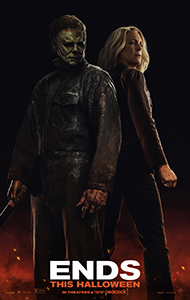 The Final Chapter, The Final Nightmare, The Final Friday - we’ve been here before, even more than once in the same series. It doesn’t feel that long ago (but probably is) that Halloween H20 was supposed to be the closing word on Michael Myers. But it made bank, so he regained his severed head, but the series soon died again.

The second reboot, taking the series off into its fourth possible timeline, in 2018 was also supposed to be the last one. It was fine, flawed here and there, but carried an aroma of crispy fried finality. It made bank, so suddenly two further sequels were announced. 2021’s delayed Halloween Kills delved deep into fan service and then some weird allegory around vigilante mobs. Laurie didn’t share a single scene with Michael – it just… strange, but housed a couple of decent scenes to just about earn a pass.

Ends though… My, my, my where to begin? Big spoilers ahoy. Well, it begins a year later – Myers is AWOL, Haddonfield has become a bit of a depressed state where everything gets blamed on The Boogeyman or his legacy. Into a simple babysitting gig walks Corey, a slightly dorky student, who replaces the unwell first choice to look after rich kid Jeremy, whose pranks ultimately lead to the kid falling to his death. 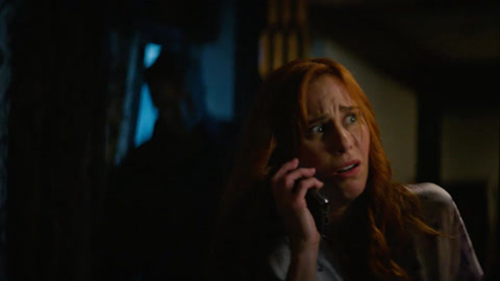 Three years later, Corey is a social pariah, hated by the locals and wasting his potential. He runs into Laurie when she wades into a confrontation with some entitled douchey teens and introduces him to Allyson, with whom Corey instantly sparks, their mutual sadness connecting them at an unseen level. Laurie soon sees a darkness in Corey that reminds her of you-know-who, threatening her new found Zen outlook on everything.

When Corey meets you-know-who, subsisting in a sewer pipe, instead of becoming another victim, they too have a meeting of the minds and embark on some bizarro twin-killer spree, taking out those who have wronged Corey in some way. Stranger still, the murders seem to go totally unnoticed, and when Corey decides his own scarecrow mask isn’t up to it, he steals Mikey’s and dons himself an official tribute act. 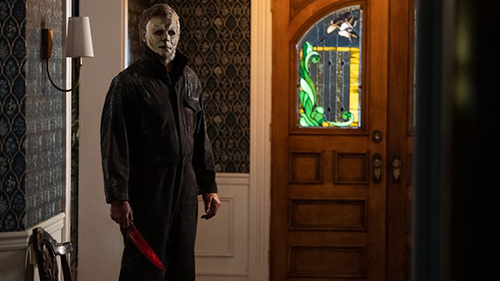 This is where Halloween Ends becomes ‘okay’ – in the same way Resurrection worked as a goofy, fun slasher movie if you divorced it from its forebears, Corey-as-Michael puts in a few decent kills, first offing Ally’s manager and the young nurse he’s sleeping with, then the douchey teens, his overbearing mom, and a shit-talking shock jock who sassed him a day or so earlier.

Knowing Laurie is trying to prevent Allyson from leaving Haddonfield with him, Corey’s final call is at their shared house and Michael, clearly just wanting his mask back, isn’t far behind. He and Laurie fight, and she finally gets him where she wants him, resulting in a town-wide procession to rid themselves of the Myers curse once and for all. And the ending is final. It has to be… If we get Halloween Re-Resurrection in four years, fuck knows how they’ll find a workaround to explain this one. 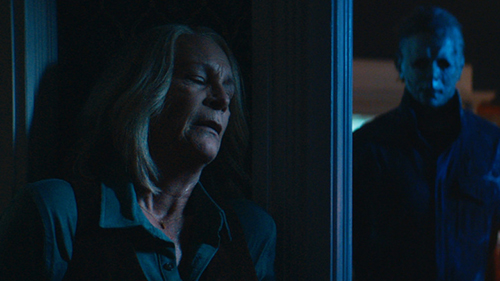 Jarring tonal shifts have plagued this new trilogy, from ballistic body counts, overly sadistic murders, that ‘Evil Dies Tonight!’ nonsense, and now the new Yoga-Laurie, although her early scenes just hanging out with Allyson and Lindsay are probably where the film feels most relaxed and natural. It’s almost like a ‘Haddonfield’ TV series was condensed into two hours, and between the not-awful scenes of Kills and Ends, there could have been a decent last outing, but the whole 2018-22 reboot cycle has been the epitome of needlessness.

I never thought I’d say this of a JLC-starring Halloween movie, but this is the worst in the entire series. Remakes included.

Blurbs-of-interest: Michael O’Leary was in Fatal Games; Joanne Baron was in iMurders.