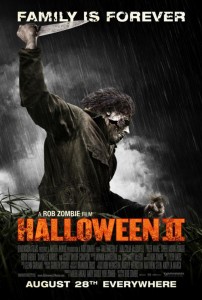 Dire-logue: “Bad taste is the petrol that drives the American dream…”

When you collect slasher films you resign yourself to seeing your expectations dashed time and time again. Promo will attempt to convince you that, say, Teenage Death Camp Massacre Part VI is the best horror film in years, only for it to be about as pleasurable as rectal surgery. Annoying as this is (and do I learn? No.), the law of binary opposites means that occasionally a film will be bad-mouthed so much that you hold off watching it, only for it to turn out to be not that bad…

Rob Zombie’s Halloween II is certainly no worse than his 2007 effort to ‘re-envision’ the yarn of Michael Myers. In fact, by choosing not to remake any elements for his sequel, H2 is slightly more bearable in those terms. Be not fooled, this is by no means a great film, it barely flirts with competence at times but I was at least engaged for the most part.

Laurie and Michael are collected from the scene we left them in at the end of the 2007 film. She goes to hospital with Annie and his body is carted off in the direction of the morgue, only to be lost when the ambulance hits a cow (!) and Michael is reanimated and scoots off in search of Laurie. This is about as close as we get to 1981’s Halloween II as we’re going to find ourselves as he turns up at Haddonfield Memorial, kills some poor schmucks and chases Laurie – and then she wakes up. Was this a dream? A flashback? We’re never clear.

What is unfortunately clear is that – two years later – Laurie has become a gothic, potty-mouthed rebel who now despises Annie and Sheriff Brackett (with whom she lives), hates her shrink (Margot Kidder’s cameo), hangs out with ‘less desirables’ in a conspiracy bookstore and eventually finds out that she’s Michael’s sister, thanks to Dr Loomis’ book on Myers being promoted locally. Loomis has also changed, he’s now a self-obsessed egocentric touting his book on TV and being ridiculed by Weird Al (!!). And finally Michael, now in full hobo garb – complete with Santa-beard – follows around a vision of his Mom, his younger self and a horse (!!!) as they lure him back in the direction of Haddonfield to reunite the clan. In English, go kill Laurie. 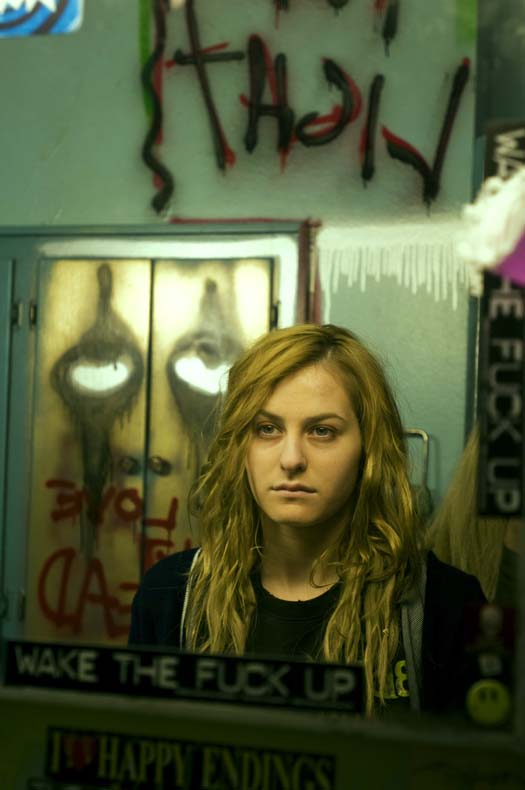 Yes, kill her. She’s a bitch! Really, she is. Whether Scout Taylor-Compton is cursed to forever appear in crappy horror remakes and their various offshoots is a mystery and she’s not entirely at fault for how the character has been written but she’s a shoo-in for most unlikeable final girl, like, EVER! Come Halloween, Laurie decides to get drunk and go partying with her scuzzy friend Harley and her quite nice friend Mya, all dressed as Rocky Horror characters. Michael comes too, kills a couple of people at the party and then chases after Laurie all over again. Thankfully, this chase doesn’t go on as long as the one in the first film but is complicated by Laurie sharing Michael’s visions of Mom and young Mikey. What? No, seriously, what???

What is good in the film is the sense of the consequential: so few movies in the genre ever look into the recovery of the survivors, their families, the profiteering that goes on. Loomis’ book-signing is good and Annie finally telling Laurie what a cow she’s become is good – she survived too! Speaking of whom, Danielle Harris is great in the role and would’ve made a far more appealing heroine this time around, hell, even Brea Grant (as Mya) racks up more sympathy in her meagre screentime. 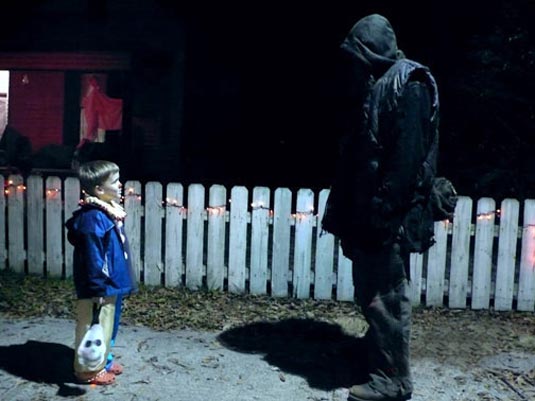 I expected ultra-violence here and some of the kills are needlessly protracted; there’s as much sleaze as before – strip clubs, topless girls randomly littered around the place, aggressive attitudes towards sex and nonchalant attitudes towards death, possibly Zombie’s intention, note the Direlogue choice. Halloween II is a tad amoral; but it’s okay. No more, no less. Tolerable. Michael being reduced down to a maskless nobody by the end – who frickin’ speaks - could be why so many individuals feel the series has flatlined. The announcement of a Halloween III for 2011, which is rumoured to be another reboot, means that whoever takes the reigns from here on out (and I hear it’s Todd Farmer – oh God) has their work cut out for them if they’re going to resuscitate the Myers’ franchise.

Blurbs-of-interest: Actors carried over from the first film were McDowell (who can also be found in Silent Night and Mischief Night), Taylor-Compton, Dourif, Mane, Harris and Rob’s wife (whose role is pretty much crow-barred in); see the blurbs here for their other appearances. Brea Grant was in Midnight Movie; Margot Kidder was in Black Christmas and The Clown at Midnight; Betsy Rue was in My Bloody Valentine 3D and Groupie; Angela Trimbur was later in The Final Girls; and Daniel Roebuck was in Final Destination.