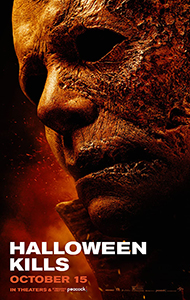 Halloween has turned into its very own ‘Choose Your Own Adventure’ series now, with three paths to pick at the end of the original: You can go the 1-2-4-5-6 route, the 1-2-H20-Resurrection way, or 1-2018-Kills-Ends. Interestingly, both latter avenues were accompanied with a sort of “oh, we just ignored all those awful sequels!” narrative, and with the release of Halloween Kills, both latter avenues have delivered instalments that are decidedly inferior to those 80s-90s efforts. Spoilers will need to ensue.

Allyson’s cheerleader kissin’ boyfriend Cameron stumbles upon the not-quite-dead Deputy Hawkins and we’re whisked back to 1978, with Hawkins the younger and his colleagues hunting The Shape after Dr Loomis shot him out of the Doyles window. Tommy’s bully, Lonnie Elams, has a creepy encounter, and the cops track him back to the Myers house, perfectly captured as we last saw it, and Loomis himself is even resurrected for the occasion. 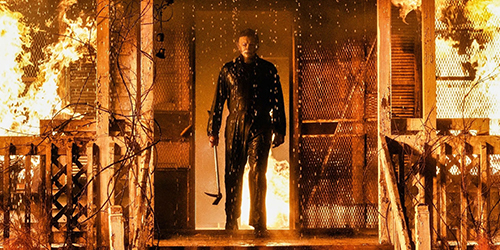 In 2018, Laurie is rushed on to the operating table, while Karen becomes a bit of a Karen with the hospital staff, and the cops get a debrief from Allyson. Meanwhile, firefighters enter the Strode house and guess who is not burnt to a cinder? Michael wastes no time in taking out half a dozen burly firemen before tottering back towards town.

Elsewhere, middle-aged Tommy Doyle tells the tale of the babysitter murders at a bar, where he’s drinking with Lindsey Wallace, Lonnie, and Nurse Marion (why is she there??). When the news reports murders, they team up with a couple seen briefly in the previous film to lead a vigilante mob to take out Michael.

Things go wrong, people die, and Tommy ends up at Haddonfield Memorial where he stirs anxious relatives of the injured and missing to a mob frenzy, including the former Sheriff Brackett, now working security there (despite being like 80) and the crowd start chanting: “Evil dies tonight!” over and over. It’s a weird scene, at odds with anything you’d expect from a Halloween movie.

Laurie is informed Michael is not dead and tries to leave, but the baying crowd begin hunting one of the other escaped patients from the bus crash. Nobody will listen to reason, so Karen decides to help the man and locks him in a corridor on an upper floor. The mob attack and he eventually throws himself out of a window to his death. 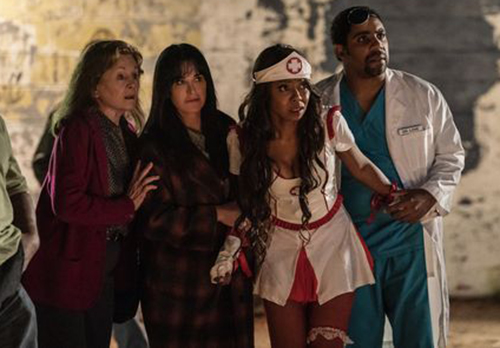 Things culminate at the Myers house, now inhabited and renovated by a gay couple. There’s a good scene in which Karen manages to steal Michael’s mask and is chased through some yards until the residents of Haddonfield have him surrounded and exact their revenge. But because we know Halloween Ends is slated for 2022, things don’t work out quite as planned.

So, Laurie shares no scenes with The Shape whatsoever and a whole lot of time is spent with Tommy Doyle’s lynch mob, shoehorning in actors and characters from the original who are inexplicably still living in Haddonfield forty years later, and hang out together in bars. It’s contrived as fuck fan service, but this is a slasher film so why should it even matter? Halloween Kills is a damn mess, but it may improve as the bridging instalment once the third and final chapter comes along, though if the history of this series has taught us anything, it’s that someone will find a way to bring it back again one way or another. 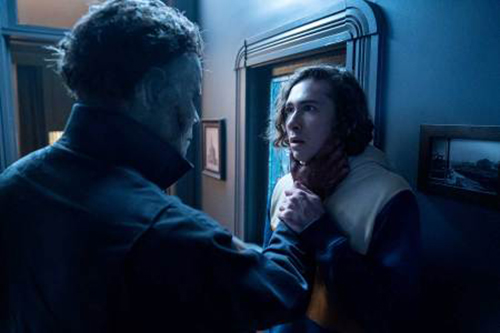