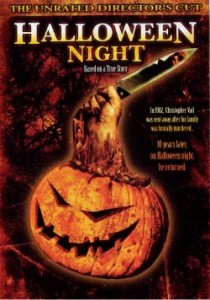 “In 1982, Christopher Vale was sent away after his family was brutally murdered. 10 years later, on Halloween night, he returned.”

If you’re not familiar with chintzy, low-bud production house The Asylum, then they’re the company who work a fast-paced assembly line approach to filmmaking, offering cheapo alternatives to then-present blockbusters, such as The Day the Earth Stopped, Snakes on a Train and recently Monster Shark vs. Giant Octopus! Although what that final one was made in response to is anyone’s guess. Each made-for-DVD film is garnished with overly-familiar artwork in an attempt to trick dim-witted browsers into selecting the wrong film. They also spun out Hillside Cannibals and When a Killer Calls in recent years.

So, Halloween Night then? Timed to coincide with Rob Zombie’s remake of a certain classic slasher flick, the UK box art for this one even featured a strikingly similar font for its title! Anyway, they duly knocked out this rubbish, a film which can’t even get its own story straight. According to both the box and the title cards, the film is “based on a true story” – yawn. Is it though? It is really? It’s certainly based on someone else’s hard work.

What ‘true’ tale this may be remains unresolved by the end, though it’s unlike anything that was front-lined in this seen-it-all-before-and-a-thousand-times-better effort, which sees an escaped mental patient crashing the Halloween party of uber-jerk David and friends. According to the tagline, this occurs in 1992, yet all the characters have cell phones and digital cameras.

Events unfold in a predictably boring style with the killer stealing an early victim’s costume so everybody unquestionably assumes he’s their buddy until he impales them on something. A brief subplot concerning a prank gone wrong fills the midsection and gives the cops an excuse to break up the party and send most of the mob packing, leaving only a handful of morons behind to bolster the body count. What’s becoming a worrying trend in skid row-budget flicks is the totally extraneous lesbian love scene, present and accounted for along with a ‘here we go again’ ending.

Acting wise, the leads go for a naturalistic approach, although David is such an asshole that it’s difficult to concentrate on any positive attributes he might have. Might. The sad fact for all those involved though is that the film exists only to try and fool people into thinking it’s something it blatantly isn’t.

Blurb-of-interest: both leads Osedach and Kochan were in When a Killer Calls as well.

tagged with calendar carnage, get your own ideas!, rip-off central, slasher, who finances this crap!?