Happy Halloween! So there were two movies named Mischief Night that came along in 2013 and 2014 respectively. Are they the same? Is one better? What the fuck is Mischief Night? 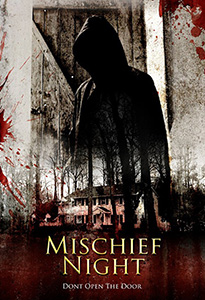 Laughter Lines: “You go hide in the closet while I check it out.”

Mischief Night 1.0 begins with Erica Leerhsen and Charlie O’Connell (Jerry’s lil bro) as a couple conducting extra-marital naughtiness with one another when they become suspicious somebody else is in the house. It’s Mischief Night – the night before Halloween – so they foolishly write it off as douche teens getting their jollies. Of course, it’s a psycho in a yellow rainmack and creepy mask – not a far cry from Alice, Sweet Alice - who offs them in good time.

Emily Walton has psychosomatic blindness ever since her mother’s death in a car accident nine years earlier. Her shrink thinks she can get past it but she’s reluctant to relive the crash, focusing instead on getting her dad to allow her to go skiing with her boyfriend Jimmy at the weekend. When dad has a date, Emily stays home alone and before long yellow-rainmack has entered the house and quietly stalks her. 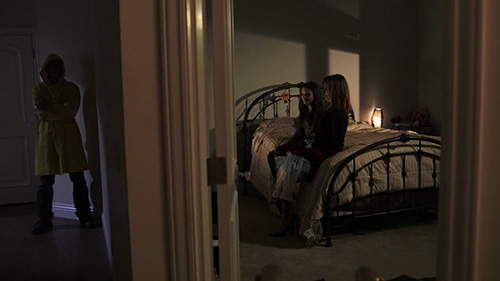 The majority of the film is a cat and mouse affair as Emily makes her way around the unfamiliar house – one or two people show up to get murdered (a particularly brutal knife through the chin stands out) – and when Jimmy turns up, he always seems to find a reason to leave a minute before rainmack man shows up again.

The film excels when Emily (and some others) totters around with the killer inches away, despite previously attempting to establish her other senses are honed, which is reasserted for the climax, where she can hear a near whisper through the floor. Things tie themselves in a knot come the very end where, of course, her eyesight begins to return at just the right moment.

However, while the outcome of the killer not being anybody we’ve seen before and just doing it “because it’s Mischief Night” might be some notion of “real” horror, it also plays out like they built a mystery they had no intention of resolving, so there’s a sense of being cheated out of a decent resolution. 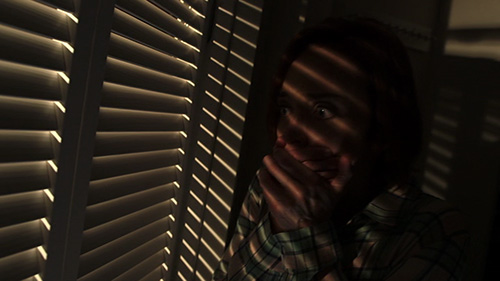 Coet makes an appealing heroine and acts the part well, but the film wastes a few opportunities to up the bodycount and perhaps have a few more scenes away from the house. Think that old Madeline Stowe thriller Blink crossed with the car-o-phobic girl-stuck-in-car slasher flick Penny Dreadful.

Blurbs-of-interest: Erica Leerhsen was in The Texas Chainsaw Massacre remake, Wrong Turn 2, and Lonely Joe; Charlie O’Connell was in Devil’s Prey; Richard Riehle was in Hatchet, The Watermen, and Texas Chainsaw 3D. 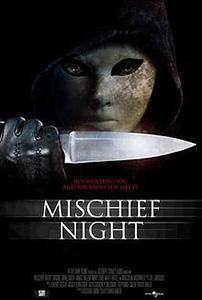 “All’s fair in blood and gore.”

Laughter Lines: “I was always the kid that talked to strangers took candy from old men.”

The difference between this Mischief Night (actually shot in 2010 and only renamed on the UK DVD box, not the film itself) is that if you went into it blindly expecting another girl-alone-in-house slasher flick, you’d likely become confused or annoyed some 30 minutes in, despite the nice photography and lush score. Fortuitously, I read in advance to expect something different and, well, admittedly I was sighing internally for a while there.

A car rolls up in a stock middle class suburb and the driver changes clothes and dons a mask and begins to stalk the neighbourhood. It’s Mischief Night, so we track a trio of supremely stabbable boys as they throw garbage everywhere, pelt a jogger with eggs, and generally behave like dickwads. They meet their match in teen babysitter Kaylie, who hoses them down before they can attack the house where she’s working.

It’s quickly established that she’s disaffected and apparently pines for the affections of classmate Graham, who’s apparently only interested in her BFF Daphne. When Daphne comes over, she’s slashed to death by the intruder, who then attacks Kaylie. She puts up an admirable Sidney Prescott fight and he’s put off by the fact she’s not remotely scared of him. Instead they talk a bit, then go out and create some mischief of their own, before getting drunk and having sex.

Is there some Stockholm Syndrome at work? Yes… and also no. Who is playing who? This film has a lot of talky scenes, but is actually full of good dialogue and excellently acted by leads Smith and Valera, each of them wounded by the circumstances of their existence and trying to find a way to reset the balance. It’s the kind of content you’d more expect to find in a thriller novel or even a stage play, but my attitude to the film had by this point done a 180.

There’s a twist I half saw coming, but it’s handled a lot better than I expected it would be. And for those grimacing at the prospect, there still is some slasher movie goodness to be found – the three asshole kids do return and do get what they deserve – and the film ends with a sort of ‘if only’ bittersweetness and then several minutes of Malcolm McDowell’s various outtakes (he appears for all of five minutes in the film proper, as a kooky neighbour).

It’s difficult to try and recommend this as a slasher film, but its nearest relatives would be something along the lines of Last Girl Standing and maybe Behind the Mask but without the laughs. A difficult film to pin down, but an interesting one if nothing else.

Blurbs-of-interest: Nikki Limo was in Smiley; Matt Angel was in My Super Psycho Sweet 16 and its first sequel; Malcolm McDowell can be found in The Surgeon, Silent Night, and both of Rob Zombie’s Halloweens.

So which Mischief Night reigns supreme? Given that the only real similarity is that they revolve around a girl alone in a house, it’s not an easy pick, but the 2014 film is definitely the one I’ll remember for longer.