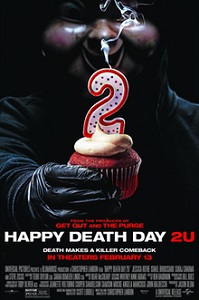 The day she thought was over …is starting again. Spoilers follow.

The consequence of these changes is that the film moves further away from its negligible slasher template towards more of a cutesy sci-fi romp with a killer operating in the background. Even so, there’s still a lot of fun to be had if you don’t rock up expecting slasher sequences galore. We get a few, mostly in the first half, but otherwise this is a different tale.

Carter’s roommate Ryan, seen repeatedly interrupting in their dorm room first time around, finds himself caught in a time loop of his own creation, with another version of himself behind the baby mask, seguing nicely into an explanation of Tree’s experience: Ryan and some classmates built a machine that basically caught her up in the loop and now, is sending her into a parallel universe where she’s looping again.

This time though, Lori is not the one with the knives out for her – and her mom is alive! Understandably moved by getting her mom back, Tree decides to stay in this new corner of the multiverse, but soon learns that she’s just living a life that isn’t hers. And she still has the wackadoo maniac to deal with – their identity is pretty obvious this time though.

As a comedy, HDD2U is gold. Bitchy sorority prez Danielle is back, this time as a kinder, dimmer version of herself, who confuses Anne Frank with Helen Keller and has a great scene pretending to be blind to distract the Dean while the others steal his keys to liberate the time-bending machine.

Those looking for slasher thrills may be best to cruise on by though. The PG-13 rating is in full force with little to no bloodletting, some cool demises for both the luckless extras caught up in Tree’s rinse and repeat nightmare, and the methods by which she chooses to off herself every time the day requires a reset. Stick around for the mid-credits scene which seems to push Happy Death Day 3 even further from the raft of dead bodies.