Long ago, before I’d polluted my delicate mindset with the body count details of 496 slasher films, I was watching Caroline in the City, remember that? There was a scene I’ve always remembered where Caroline’s maneater gal-pal went to the video store where she encountered Matthew Perry in his Chandler persona. He made a big deal out of the store not having The Piano and said to her, as some kinda lame line, that he didn’t like all the guy movies with sex and violence and then queried maneater girl as to what she was renting. ‘Sorority House Massacre II,’ he reads and the scene ends in some other way I’ve now forgotten.

I always thought they’d made up that movie title. But no, when I got my first film almanac, there it was in print, together with its entirely unrelated predecessor. That book was a 1997 guide to video (them were the days) and twelve years have elapsed between the realisation that the film is, in fact, real and me seeing it. 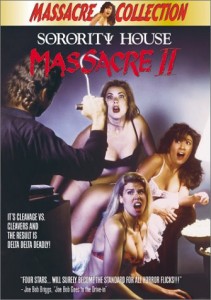 “It’s cleavage vs. cleavers and the result is Delta Delta Deadly!”

Five “teenage” girls purchase ‘the old Hockstatter place’ for their new sorority house and find out that the patriarch of the family murdered his wife and daughters there, which we are shown through flashbacks, which are actually murder sequences from The Slumber Party Massacre! The girls disrobe, have showers, we see all of them naked and then, one ill-advised seance later, one of them is possessed by the spirit of Clive Hockstatter and begins hooking the others to death. The girls, in their panic, believe the killer to be freaky neighbour Orville Ketchum, who intercedes, takes a lot of damage from knives, bullets and what have you but still survives. 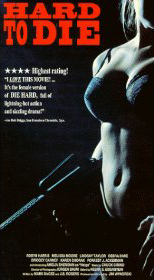 A.k.a. Tower of Terror

Dire-logue: “I just wanna get my clothes on and get the hell out of here!”

Five young agency employees are sent to take inventory of Acme Lingerie’s stock in an office tower. When a parcel containing a strange box is mistakenly delivered to them, it unleashes the Hockstatter spirit, which takes control of one of them and the inevitable occurs. The girls find an arsenal of firearms in the tower and begin shooting the place up. In their panic, they believe the killer to be freaky janitor Orville Ketchum, who takes a lot of damage from crossfire but still survives.

OK, so how on earth do you decide which is the better film out of two films that are pretty much photocopies of one another, but, you know, when someone copies the copy over again it looks worse and worse… Arguably, there’s not much wrong with the production values in either. As they hail from the Roger Corman library, both take footage from The Slumber Party Massacre for their own foul use and have bad intercut footage of grainy lightning.

Quite who these films are aimed at is a mystery: in both, virtually all female characters appear – at the very least – topless, with gratuitous shower scenes and odd squidgy-rubber sound effects as they soap themselves. Nudity and slasher flicks are like conjoined twins and that’s fine so long as the filmmakers remember they’re supposed to be producing a horror film and don’t keep forcing the nude scenes, they should appear incidental like in the good ol’ days. 77 minutes of tits, rubbish gore effects and fucking Orville Ketchum (…it just isn’t funny) makes for a tedious experience in both cases. I think Sorority might have been slightly more tolerable and it was nice to see northern lass Harris as the final girl (if one could call her character such) in both films, still, both were crap I never want to have to sit through again.

tagged with Face off, Nu-di-ty, slasher, sorority, what the hell!?, who finances this crap!?