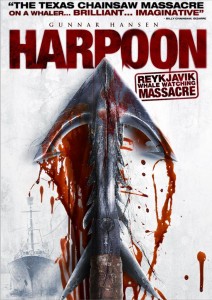 Dire-logue: “I might be disgusting to you, but this fag here is the only hope your tight Bible-belt ripped Church-going ass has of getting out of this alive!”

Iceland. Bjork, bankruptcy and that volcano-ash crisis that you don’t hear much about now… Despite being responsible for great Eurovision entries the past three years, they’ve not really made themselves synonymous with the international horror scene – until now…

Julius Kemp’s Reykjavik Whale Watching Massacre, pre-fixed with Harpoon for the lazy semi-literate audiences of yonder, is therefore an interesting movie for this reason alone, as well as being a mix of shameless bloodletting, amusing (if stereotyped) characters, post-rape Bjork sing-song and ‘the strange’…

German tourist Annett wants to see the whales. Her travel pal Hannah is more interested in getting laid and so Annett goes along on the trip herself alongside two American singles, a trio of grumpy middleaged women, a drunken Frenchman and a Japanese couple and their assistant.

Perhaps they should all take heed of the fact that the boat’s captain is Leatherface himself…albeit 35 years older and now posing as a harmless whale tour operator.

Things gradually deteriorate for poor Annett: after leaping from the dock to the departing ship she bangs up her knee, which is patched up by the handsome deckhand who then tries to rape her. While this is going on, the drunk French guy climbs the mast and stumbles, accidentally skewering El Capitano – who, we can now assume, will not brandish a chainsaw and kill everybody.

As the tourists panic and the deckhand flees in the tender, Annett stumbles onto the bridge and decides to serenade everyone with her rendition of Bjork’s ‘It’s Oh So Quiet’, just what I’d do in the same situation. Although I’d most likely opt for ‘Army of Me’.

With Captain Petur dead and nobody else around to take them to safety, the group are happy to be picked up by a local who takes them back to the whaler he inhabits with his mother and brother, who like nothing more than hacking up Greenpeace activists and friends of the whales.

No sooner do the outsiders come aboard, the killing begins and they flee in every possible direction: one guy dons a lifejacket and attempts to swim away but is shot with the harpoon and hauled back and poor Annett is captured for the second time by pervy little bro Siggi who strips her and pours paint and innards all over her body for reasons the film mercifully did not go into. 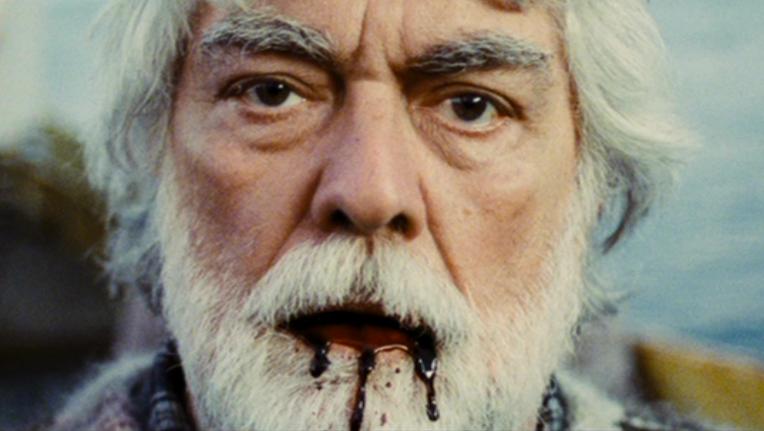 With the killers busy hunting the tourists, we begin to learn a bit more about the characters: the Americans stick together while the Japanese couple’s assistant proves that she is not one to be fucked with as she loads up one of her employers with explosives and convinces her to be a human kamikaze before escaping in the tender, leaving the others to save themselves.

Harpoon becomes something of a grisly comedy midway through. The American characters remain serious while the killers casually go about their business, taking them out with hammers, spears and knives, ill-prepared for the fact that their captives will retaliate with fire and emergency flares. 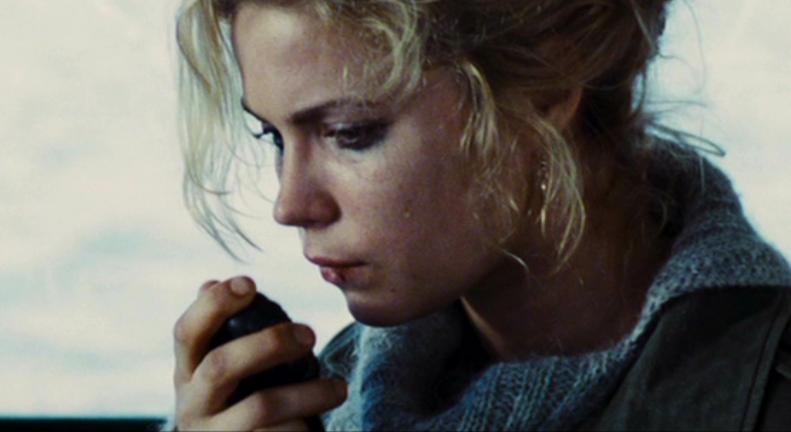 What makes things interesting is picking who will die and how: Annett is not a kick-ass final girl by any means, staggering about and being lucky enough to simply not die so far, while beareaved American Marie-Ann appears to fit the bill but gradually transforms into a selfish bitch who will gladly kill a whale to ensure her own survival. And there’s a nominal black and gay hero (!) who pretty much does all of the legwork and is responsible for that excellent piece of Dire-logue.

So we’ve got the original Leatherface, suicide bombers, merciless Japanese survivalists, a demented Nazi psychopath family and plenty of grue: what’s not to enjoy? Perhaps only the absence of any whales beyond the depressing stock footage that adorns the opening credits and that of the killer whale that decides the survivors haven’t quite been through enough at the climax. Europe’s where it’s at!