You can’t pole dance without hands 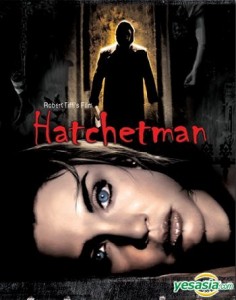 Dire-logue: “Mommy taking her clothes off isn’t as bad as hurting people!”

It’s curtains for the working girls at an LA strip joint – because there’s a masked maniac on the streets with a rather funky looking axe who wants to chop off their hands!

This seen-it-all-before boobs n’ blades fest is certainly handsomely pieced together and has an appealing heroine in Courteney Cox-a-like Burns, but practically re-runs sequences from every other cop vs serial killer and slasher flick ever made. Most obvious is the killer-in-the-backseat motif ripped from Urban Legend.

Naturally, the cop on the psycho’s tail happens to be dating the final girl and imparts crappy advice about security while all her colleagues (who all live in the same apartment complex, which is also plagued by a pervert who breaks in and tries on their underwear!) drop dead around her. Furthermore, he places just ONE cop to sit outside and watch over the shrinking group of strippers.

The pantie-perv and a paroled ex-boyfriend of the first vic are transparent red herrings, while the real killer can only therefore be one of the other ancillary cast members.

Annoyingly, most of the irritating male characters avoid the killer’s blade while the voluptuous girls fall by the wayside and the director fleshes out proceedings with plenty of flesh indeed.

Hatchetman is a schlocky number with the nerve to take itself seriously for the kind of schlocky men who are likely to frequent the clubs seen in it. There’s a hilariously last second motive glued on and a final ‘twist’ delivered as passing dialogue: “Do you think they’ll ever catch him?”

tagged with get your own ideas!, Nu-di-ty, rip-off central, slasher, slasher films that aren't supposed to be funny but are funny