Pay to be Prey 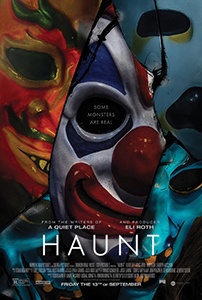 “Some monsters are real.”

The Halloween attraction-gone-homicidal thing has graced us before in the low-end forms of Dark Walker, HauntedWeen, and 2018’s theatrically released Hell Fest, where patrons question just how realistic the scares unfolding in front of them are, until the masked ‘actors’ are bearing down on them, wielding some kind of sharp implement.

Four college girls meet up with a couple of guys and the six of them end up looking for what promises to be the most extreme of haunted house experiences at a warehouse in the middle of nowhere. Downbeat Harper (Stevens) is trying to shake off the experiences of her controlling boyfriend, and the abusive household she grew up in. Nice guy Nathan is into her, and the other four aren’t given a whole lot beyond their names and costumes.

Having been forced to give up their phones and sign a waiver, the kids are locked inside and begin to work their way through various unsettling passages and traps, watching a witch pull a girl out in a body bag and then skewer her – but it’s all just a stunt right? No, obvs, one of the girls soon disappears and another is injured, prompting the others to begin to question the authenticity of what’s befallen them, and thus split up to find help and/or an exit.

When a ‘helpful’ staff member steps in, the group begins to hope they’re going to escape, but they’re further separated from one another, with the masked staff members hunting them down. We stick largely with Harper as she’s forced into a situation reminiscent of her childhood trauma – one that naturally threatens to freeze her up – and then turn the traps on the assailants with satisfying recompense.

Eli Roth produced this compact little gem, which carries some echoes of his Hostel flicks, and has some cool sub-Saw trap concepts, but surprisingly holds back on going all out with the gore. A downside is the appearance of that overly familiar bound/gagged-friend-in-a-mask-pushed-into-the-heroine’s-way thing, which is irksome. Things, however, finish with a gratifying bad-ass Home Alone gag that wraps everything up without the requisite threat-is-still-out-there twist for a welcome change.

tagged with get your own ideas!, gore o'clock, slasher