Lies we tell ourselves 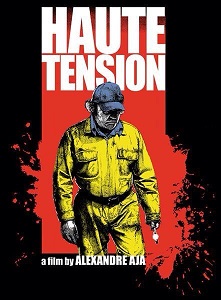 A rare four-star review in Total Film first introduced me to Haute Tension, with its minimal release in September 2004. Four stars… for a slasher flick? Turned out the minimal release was so minimal I couldn’t find a screening, so had to wait for it to arrive on DVD. That first viewing was memorable, as the film well above and beyond my expectations when that review referred to it was ‘gory’ and it was fourteen years before I spun the disc again.

College girl Alex (Maïwenn) brings her BFF Marie (de France) home to the family farm for a study break, where big city distractions won’t get in their way in the middle of nowhere. Elsewhere, a greasy mechanic in the creepiest van this side of Jeepers Creepers skull-fucks a decapitated head, which he then lobs out into a field and goes on his way.

Marie hears the carnage and Alex’s mom attacked and has to hide when the creaky-booted wackadoo comes searching for her, and here the High Tension commences: Marie urgently makes the bed, hides her stuff, and wipes the sink to make the room look unoccupied then finds a place to hide away. Trying to find a phone, she witnesses the murder of the mom – again, ridiculously savage, and finds Alex has been chained and bound ready for abduction, left for a few minutes while the killer chases down the kid brother (mercifully off camera).

Still off the his radar, Marie ends up stuck in the van when she tries to liberate Alex, and driven off as a secret captive. The next round of High Tension occurs at a gas station where she escapes the van and plays cat and mouse in the shop, while the loon converses with the jittery night clerk (who knows she’s there). Marie hides again but this time screws herself over as the killer drives off with Alex, but without her. Unable to tell the cops where she even is, Marie takes the [dead] clerk’s car and chases the creepy-ass van further into the middle of nowhere, until he works out she’s there.

Final girl shoes on, High Tension Round 3 is Marie versus the killer in a grow house. At this point, those who criticise slasher films for bad decision making are probably happy that Marie doesn’t drop her weapon when she finally has the option to strike back, beating the fuck out of the killer until he ain’t ever getting up.

And then the twist cometh… Marie is the killer.

HOW? we caw, there’ve been multiple scenes where Marie’s been in the back of a moving van with Alex. And yet…

Watching the film back with foreknowledge of this actually unearths several clues: Marie talks about a dream she had where she was being chased by a madman, but felt she, too, was chasing herself; The seams of where Marie ends and her ‘other self’ takes over are sometimes apparent as well. She has no clue she is both people, so when she finally frees Alex, she has no clue why Alex immediately stabs her.

The misty motive is a partially-offensive obsessed-lesbian thing: Marie loves Alex and is crazy jealous that it’s not reciprocal.

Many have stated the twist entirely ruins Haute Tension and, to some degree, it is damaging. Much fuss has been made over the story similarity to the Dean Koontz novel Intensity (where no such twist exists), so it’s possible to see why Aja wanted to steer away from copying it entirely. I took it to be Marie’s version of events (in her head, at least), as the opening scene occurs in the aftermath of it all. It does undermine some of the amazing scenes, but really, who cares? Lots of horror movies stock weird twists, I think if the first two acts weren’t so good, nobody would be bothered. That Aja has created such an effective slasher experience has super-charged the negative reaction – better than indifference though, eh?

Gobs of gore likely also contribute to the admiration the film has garnered. Over a minute was cut to avoid a Stateside NC-17 rating, and the unedited version is relentlessly violent during the four on-screen murders, with tsunamis of bloodletting that is sometimes hard to take. Aja surfed this blood wave to helm US remakes of The Hills Have Eyes and Piranha 3D.

A horror experience if ever there was. See it uncut and undubbed.

tagged with before they were famous, gay stuff, get your own ideas!, gore o'clock, Nu-di-ty, slasher, spoilers, spunky final girl, weird-ass twist