“It’s really a one person job.” 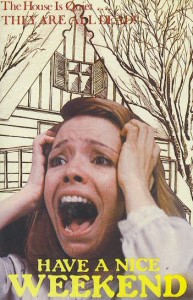 HAVE A NICE WEEKEND

Dire-logue: “You do exactly what I tell you! Mother – make sandwiches for everyone.”

A thoroughly depressing pre-Halloween mystery with elements of the growing stalk n’ slash opus, largely borrowing from Psycho. Young Chris has just returned from Vietnam and wants to meet up with his family, so mom, dad, sis and her college roomie gather at their island summerhouse. Family friends Donald and Joan are already there and Frank the caretaker is busy readying houses and stuff for the winter.

There’s something weird about the get together, as illustrated in sporadic flashbacks to altercations between various characters. And why was Chris wearing a disguise when he returned? Well rest easy ‘cos none of these issues are resolved before, during or even after the murders begin occurring – a whopping three of them. In the wake of one stabbing and one trowel-meets-head incident, much of the film is taken by by repetitive dialogue as people try to suss each other out after realising the killer is one of them. Though being stuck on an island with these people would surely send even Ghandi on a machete wielding rampage… Unless he hadn’t already been bored to death by the script.

The killer is eventually revealed in one of the most terminally dull ways imaginable and, after a title card mercifully informs us we’ve reached the end after the longest 74 minutes in history, there’s a six minute epilogue where a shrink explains to one of the other characters what was happening inside the killer’s head.

Worth seeing only for the sandwich-making scene where Joan says “it’s really a one person job” approximately eleven hundred times in two minutes. One brief note of a hope for the future is that Have A Nice Weekend is so rare it appears only to have ever been given one UK video release way back when. The only way I could rid myself of the thing was to hide it in a bundle of videos I gave to the YMCA store. Find anything else to do if you want a nice weekend.

tagged with slasher, who finances this crap!?